Arcee is a female Autobot, usually pink in color. Being the most famous of the Female Transformers, she has two primary forms. Her personality also varies, in the original series, she was friends and a lover to Daniel Witwicky and was briefly binary-bonded as a Headmaster with him, while her Prime incarnation portrays her as being a female Autobot who likes to work alone.

In Generation 1, she as voiced by Susan Blu.

Although a group of Female Autobots had already been featured in one episode of the original cartoon series, Arcee quickly became the most famous due to her position as a recurring cast member following her introduction in The Transformers: The Movie. In the movie, it was implied that Arcee might have had feelings for Hot Rod, but since his transformation to Rodimus Prime she seemed to grow closer to Springer.

Voiced by Susan Blu, Arcee was a gunner and was depicted as being an excellent marksman. In the Season 3 introduction, "Five Faces of Darkness", she accompanies Springer on a mission to track down a sleezoid ship. The mission eventually reunites them with Grimlock and Rodimus Prime. They also go onto rescue Ultra Magnus, Kup and Spike Witwicky from the clutches of the Quintessons.=

Arcee would appear sporadically over the course of the season, and even kept her main character status into the fourth season dubbed "Rebirth". She was a major player in "Dark Awakening", being among the crew zombie Optimus Prime betrayed aboard the mausoleum. And, in "Dweller in the Depths", she is seen fighting back against Springer when he is turned into an energy vampire. In Only Human, Ultra Magnus, Springer, Rodimus Prime and Arcee found their minds transferred into human-mimicking "synthoid" bodies by the human crime lord Victor Drath.

In the final three episodes of the US television series, when the Decepticons successfully stole the key to the Plasma Energy Chamber and opened the ancient device, a group of Autobots and humans included Arcee and Daniel Witwicky were blasted across the galaxy by the energy release, crash-landing on the planet Nebulos. Quickly siding with a group of rebels engaged in a war against the planet's evil rulers, the Hive, they deduced a process by which they could combine the best of their minds and bodies together, becoming Headmasters. While the other Autobot Headmasters combined with Nebulons, Daniel became Arcee's Headmaster partner in order to save his live after he was critically injured by Snapdragon as he attempted to save Arcee from being bitten by him.

Of all the main characters of the movie and third season, Arcee never received a toy during the series' original run, likely due to Hasbro believing the toy's pink color scheme would lead to boys (the toyline's main audience) considering her "too girly". In the end, Arcee's G1 incarnation did not receive a proper toy until 2014, as part of the Generations toyline. Her Energon and Animated counterparts did receive toys, though, indicating a change in Hasbro's business plans. The first G1 Arcee toy was a BotCon 2001 exclusive, though it was nothing more than a repainted (the official term in the fandom is "redeco") of the Beast Wars character Blackarachnia in her TransMetal 2 form, but with an added voice chip featuring a new line recorded by Blu.

These are versions of the character heavily inspired by G1. 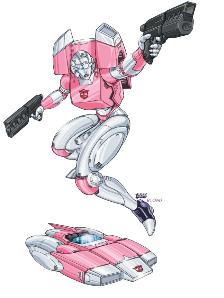 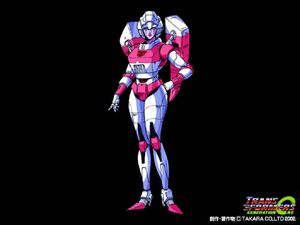 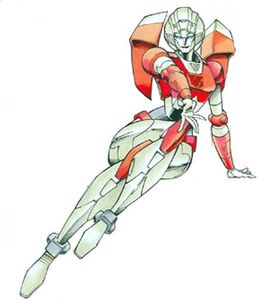 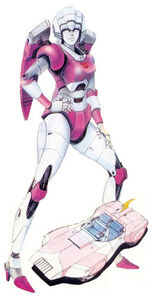 Retrieved from "https://hero.fandom.com/wiki/Arcee_(G1)?oldid=1882167"
Community content is available under CC-BY-SA unless otherwise noted.