Commander
Soldier
Two-Wheeler
The Motorcycle
Ma'am
The One

Arcee is one of the main group of Autobots in the 2010 computer animated series Transformers: Prime. She is the only female member of Team Prime.

She is voiced by Sumalee Montano, who also voiced Pudding in Space Channel 5, and Cali in the Skylanders series. In the Prime series, she also voiced Rafael's mom.

She transforms into a blue motorcycle, inspired by her appearance in the live film series, but with a more humanoid robot form. As a motorcycle she is capable of producing a humanoid female hologram driver who she refers to as "Sadie" to help disguise her identity. She can form bladed weapons or blasters from her hands. Arcee is the most focused character in the series, and arguably the show's main protagonist for much of the first and second seasons. Arcee played a smaller role in the third season, but had an episode that focused on her, "Plus One", where she started a potential relationship with Wheeljack, convincing him to stay with the Autobots.

She is the only character to have actual flashbacks and complete in-depth origin episodes, where as characters such an Optimus Prime and Smokescreen have images of an event while they narrate the story. Arcee is also the only character to have two "arch-enemies" Starscream and Airachnid, creating a three-way rivalry, holding a grudge against the two for killing her former partners Cliffjumper and Tailgate respectively. She is also the only character who appeared in every single episode of the series until "Triangulation" (in which she was only mentioned) in the middle of the second season. After that she was absent from only three more episodes: "Triage", "Chain of Command", and "Thirst" (a Decepticon focused episode that featured no Autobots). Coincidently, Arcee's human partner Jack, is arguably the most focused human of the series, having had his own background focused on more in-depth unlike most other human characters.

After the loss of her partners, Arcee became more of a lone wolf, and portrayed a strict, mature, and serious demeanor. Despite this, she shows herself to be kind, loyal, and caring for her friends and allies, but had a limit on joking in situations. In addition, she doesn't like to be underestimated or criticized by Autobots, Decepticons, and humans. An example is when Vince mocked Jack's motorcycle, leading to Arcee to have Jack race him, with her stating that winning isn't everything, but to make Vince cry. 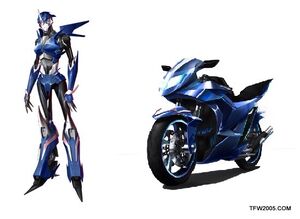 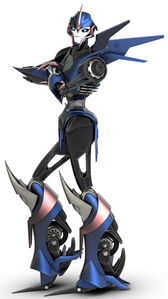 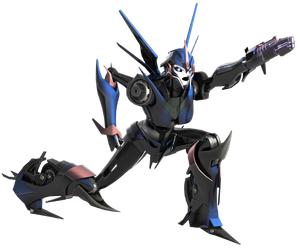 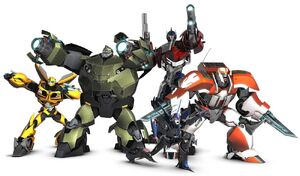 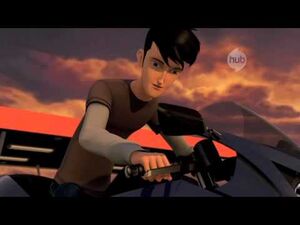 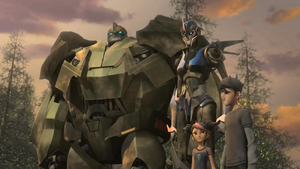 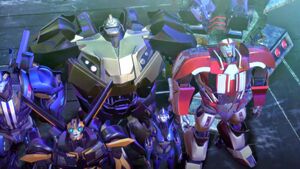 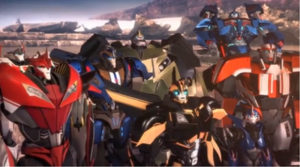 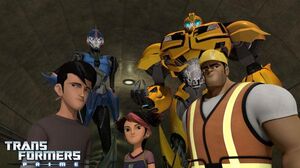 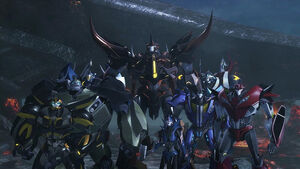 Arcee, Team Prime and the Predacons after Unicron's second defeat. 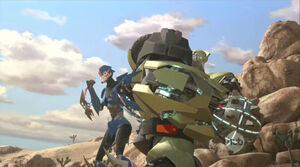 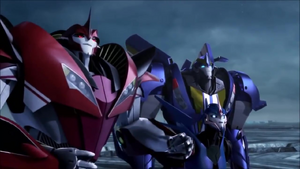 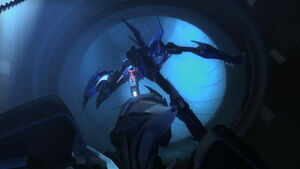 Retrieved from "https://hero.fandom.com/wiki/Arcee_(Transformers:_Prime)?oldid=2301075"
Community content is available under CC-BY-SA unless otherwise noted.