Can transform into a Ducati 848 Superbike

Transforming into her vehicle mode

Arcee is a supporting protagonist in Transformers: Revenge of the Fallen. Though small compared to many of her peers and adversaries, she compensates with speed and aggressive maneuvers, making her one of the most dangerous Autobots around. Moreover, Arcee is a born hunter. She honed her speed hunting turbofoxes with other speedsters, challenging herself to get as close as possible before tagging them with her bow. She's a crack shot with said crossbow weapon, and Ironhide has trained her to use her speed to her advantage in battle, striking suddenly and swiftly and then vanishing away again as fast as she appeared.

In Revenge of the Fallen Arcee was accompanied by two similar Transformers, Chromia and Elita One, sharing similar robot and vehicle forms, as well as the same holographic driver. They chased the Decepticon Sideways in an alley in Shanghai, but lost track of him. They were later present when the Autobots faced off with the Decepticons in Egypt and were sent with Ironhide as an advance team to recover Sam. Upon finding Sam and Mikaela, several Decepticons attacked, Arcee and Elita-One were shot and killed while Chromia was last seen taking cover.

The events on Tyger Pax created a nagging doubt in Arcee about her abilities. She carries some guilt about Bumblebee's injuries and part of what drives her is the desire to prove herself, not only in the optics of her friends and comrades, but most importantly in herself. 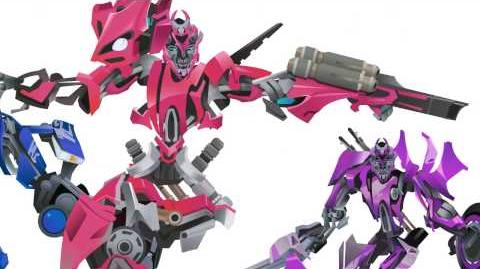