Defeat Magneto and the Brotherhood of Mutants.
Save his father from the Omegas (original timeline, both succeeded).
Obey the orders and wills of Apocalypse
Destroy the current civilization and build a new world where the strong (mutants) will survive (revised timeline, both failed).

He was portrayed by Ben Foster and Cayden Boyd (who also played Max in Sharkboy & Lavagirl) in the original timeline, and by Ben Hardy in the revised timeline.

In the film, Angel is a young man in his early twenties, the son of a rich industrialist who is motivated by his son's mutation to create a cure for mutants. In a flashback, Warren (as a boy) is seen attempting to cut off what would eventually become his wings. He flees before Dr Kavita Raocould inject the cure into him, and goes to find the X-Men for help. He later makes an appearance in the final confrontation against Magneto's Brotherhood, rescuing his father after he is thrown off of a roof by Quill, Arclight and Psylocke. Towards the end of the film, he is seen flying across the repaired Golden Gate Bridge and past several people in a park, moments before the camera shifts its focus to a depowered Magneto.

Angel appears in the film, which takes place in the new timeline created after Mystique spared Trask's life. He is portrayed by British actor Ben Hardy.

This version of the character is introduced as a combatant in an underground mutant fight club, where he has defeated many opponents. After one of his wings is crippled and mutilated during a fight with Nightcrawler, Angel is approached by Apocalypse, who offers to make him more powerful. He replaces the youth's wings with new ones made of metal, transforming him into Archangel.

During the final battle, Archangel is killed after being trapped inside the X-Men's jet just before it crashes.

When Angel's powers first emerged, his body developed a higher metabolism, lost all body fat and became more muscular, and his bones became hollow, allowing him to run faster and jump higher. It was later revealed that Warren is at peak human levels which include his senses, strength, speed and reflexes. It was revealed that Angel is either a descendant of the Cheyarafim mutant race or his mutation resembles the mutations specific to this race.

Angel then sprouted and grew white, feathery wings. Angel's natural wings give him the ability to fly. They are super-humanly strong, easily capable of breaking a man's bones and tossing someone through a wall, and allow him to lift an additional 200 pounds. He has super-humanly sharp vision and hearing, and his eyes can withstand high-speed winds. His body is accustomed to low temperatures at high altitudes, and his lungs can breath easily even at full flight speed. Warren prefers to fly under the clouds, and can normally fly nonstop for half a day. However, he can reach the highest recorded altitude of a bird (equivalent to the height of Mount Everest), which quickly tires him out.

It has been argued that Angel possess some kind of internal flight organ, but more likely several small ones throughout his body and that his wings offer the additional thrust and stability for actual flight. This would explain how Angel manages to hover for long periods of time and how he experienced little exhaustion in his arms and legs whilst flying. It has also been suggested, but never proved, that Angel's feathers are some kind of silicon or substance which act like solar panels providing him with the massive amounts of energy he would need for sustained flight.

Later, he developed a secondary mutation: a blood-borne regenerative healing factor that enabled him to heal at an extraordinary rate. Superficial lacerations and punctures heal almost immediately and more severe injuries, such as broken bones or internal organ damage, heal within days. This healing factor can also be transferred to others via blood transfusion. Once transferred to an injured/ill individual (especially if they share his blood type), their tissues regenerate or can even be resuscitated if recently dead, but this ability is limited by the amount of blood Angel can transfer or survive losing. As a result of his Cheyarafim nature, Angel's blood is toxic/caustic to the Neyaphem mutant race, including Nightcrawler.

Apocalypse's Celestial modifications granted him different and far greater abilities. His skin turned blue and his tissues were enhanced, granting him even greater super-human strength, durability, and endurance. He was given razor-sharp, retractable wings composed of an unknown metallic substance. The wings could also shoot poison-tipped metal feathers. Warren has independent control over each and every feather. However, the wings were sometimes hard to command, especially when Warren felt strong emotions. 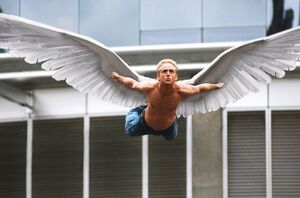 Archangel flying away in the Original Timeline.

Archangel's death in the Revised Timeline.