The Hunchback of Notre Dame

The Archdeacon is a supporting character from Disney's 1996 film The Hunchback of Notre Dame. He is enemies with Claude Frollo. He is voiced by the late David Ogden Stiers, who played Cogsworth and Jumba Jookiba.

He first appears near the end of the movie's prologue, condemning Frollo for his cold-blooded murder of an innocent gypsy woman on the steps of Notre Dame Cathedral, as well as his attempting to murder the woman's deformed baby son. Though Frollo refuses to accept responsiblity for his crimes, the Archdeacon points out that if he does not repent, God will punish him. Considering this for a brief moment, Frollo agrees to listen to the Archdeacon, who tells him to care for the baby he was about to murder and raise him as if he were his own son, which Frollo reluctantly accepts. The Archdeacon leaves to give the woman a proper burial. Frollo names the baby Quasimodo.

The Archdeacon appears twenty years later protecting Esmeralda from Frollo's wrath when she seeks sancturay in the cathedral. Esmeralda expresses disgust with Frollo and also the callousness of the crowd that was tormenting a now adult Quasimodo at the Festival of Fools earlier. The Archdeacon points out that Esmeralda cannot right all of the wrongs in the world by herself but nevertheless urges her to seek inspiration from God.

The Archdeacon appears briefly singing a hymn, before Frollo sings "Hellfire". He later appears coming out of Notre Dame to protest against Frollo's execution of Esmeralda, only to be stopped by Frollo's Guards.

The Archdeacon's final scene is in the climax, where he attempts to dissuade a now completely unhinged Frollo from assaulting Notre Dame, only for his pleas to fall on deaf ears as Frollo pushes him down the stairs and locks the door behind him to stop the Archdeacon from interfering with his goal to kill Quasimodo.

The Archdeacon last appears briefly when Esmeralda and Phoebus emerge from the cathedral after Frollo's death.

Differences from the novel

In the prologue, The Archdeacon has dark grey hair and black eyebrows. He wears white, grey and red clothing, a red hooded cloak, brown sandals, a gold ring and wears a gold necklace with a crucifix-shaped charm on it.

After the 20 year time skip, The Archdeacon now has white hair and eyebrows. He wears the same white, grey and red clothing, sandals and his necklace, but now wears a red skullcap. 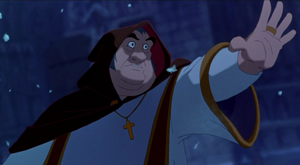 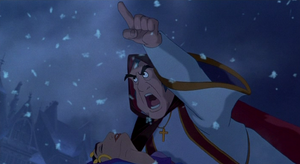 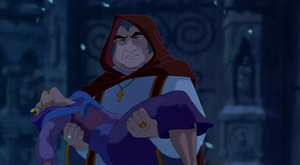 The Archdeacon telling Frollo that in order to atone for his sins, he must raise Quasimodo 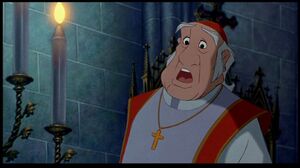 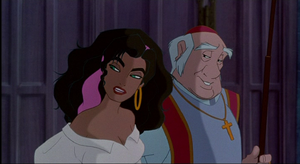 The Archdeacon with Esmeralda 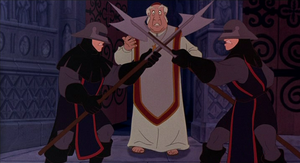 The Archdeacon stopped from protesting against Esmeralda's execution by Frollo's Guards 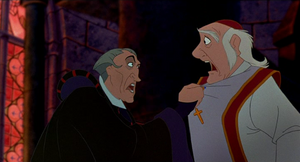