Hide from the Commando Elite (formerly)

Slamfist
Ocula
Insaniac
Punch It
Scratch It
Other fellow Gorgonites

Archer is one of the two main protagonists of Small Soldiers, the other being Alan Abernathy.

He is the leader of the Gorgonites who befriended Alan Abernathy who helped them defend them from the evil Commando Elite led by his archenemy Major Chip Hazard.

Archer is voiced by Frank Langella.

Each of the Gorgonites were given a microchip X-1000 and were programmed to hide and lose to the Commandos or find their way back to Gorgon. However the X-1000 was designed to learn and adapt to the programming which increased their intelligence but also affected the Commandos who had been given the same chip, turning them in lethal Gorgonite killing machines.

Archer was found by Alan Abernathy at a toy store after Alan talked delivery man Joe into getting a whole set of both the Gorgonites and the Commandos.

His first encounter with Chip Hazard was at the store where they were both activated by Alan and Joe. Chip swore full destruction of the Gorgonites even though Archer said the Gorgonites were peaceful and meant no harm.

He stowed away in Alan's backpack and later befriended him. He tried to warn Alan what Chip was planning, but Alan didn't understand until the store the next morning was trashed with Troglokhan being in pieces and most of the Gorgonites and all the Commandos missing.

Eventually the Commandos tracked Archer down to Alan's house and sought to attack him there. After sending out a fake Gorgonite distress call, they grabbed him and tied him above a garbage disposal unit, but Alan arrived and killed Commando Nick Nitro while the others fled.

Later Archer tells Alan that the Gorgonites are hiding as Chip Hazard was questioning him as to where the others were.

They finally find them inside a trash bin along with a dishevelled but repaired Troglokhan whom they tried to fix with the pieces that were left of him.

Archer and the others hide out at Alan's house once again, but Chip and the Commandos come up with an evil scheme to make Alan surrender the Gorgonites. They take refuge at the Fimple's house next door and take Alan's next door neighbor and love interest Christy hostage, demanding the Gorgonites in exchange for her life.

However Alan and the Gorgonites come up with a plan to deceive the Commandos and rescue Christy. They set up a decoy target composed of a box containing recordings on a cassette player and bumble balls. Alan then ties Archer who is carrying a parachute to a rocket that blast him up to the room down the chimney so he can unlock the door from the inside.

They find Christy and Archer cuts her loose. Together she and Alan destroy most of the Gwendy dolls that had been programmed by the Commandos as military reinforcements and try to escape the Commandos themselves who by this time have realized their deceit.

The Commandos then emerge from the Fimple's garage sitting on deadly utilized machines. Archer is hidden away in Alan's backpack and they ride on Christy's motorcycle to escape from them. The Commandos pursue them, but they are destroyed when Archer and the teens make a daring jump over a ravine in the park that the Commandos cannot make themselves.

However it turns out that Chip survived and was on his way back to house with even more Commandos. By this time both Alan and Christy's families had met up along with Larry and Irwin who was delighted to see how intelligent his creations had turned out.

Chip and the Commandos had arrived and launched a full scale attack on the Abernathy house. The humans tried to fight them off as much as they could, but decided that an EMP (Electromagnetic pulse) blast would destroy the chips inside them which would finish them off once and for all. Archer notices a power pylon with two transformers on it and tells Alan, who then tells Irwin, who says it's an ideal for the job. They would need to put something metal inbetween them to complete the power surge.

Alan decides to climb up to the pylon and install a metal wrench between the transformers, while Alan's father defeats more Commandos and Christy, Irwin and Larry head for the Fimple's house to activate the circuit.

Archer decides that if Alan is protecting them, the Gorgonites should do the same for him. The Gorgonites protest at first, but Archer says that if they hide, they will still lose, so they go out and take out most of the Commandos and hi-jack one of their weapons. Archer urges Alan to go, even though he knows that the EMP will wipe him out in the same way as the Commandos.

He later sees Alan being attacked by Chip and gets on the pylon himself. He bravely fights Chip, but the evil Major overpowers him and knocks him off the pylon to the ground below. However Alan manages to seize Chip and jam him inbetween the transformers, which creates the EMP blast, which destroys Chip and the remaining Commandos and Gwendy dolls.

With the Commandos destroyed, the Abernathys and Fimples receive compensation for the damages. Alan sets off trying to find the Gorgonites and finds Archer's crossbow next to the Fimple's destroyed satellite dish. He lifts it off to see Archer and the other Gorgonites unharmed as the satellite dish shielded them from the EMP blast.

Alan and Archer are both relieved to see each other and Archer declares that they have won the battle and are finally free from the Commando threat. They then set off to find their home world Gorgon. Alan takes them to Yosemite National Park and they set sail using Alan's father's toy boat. Alan tells Archer that he understands why Archer is doing this, but he may not find Gorgon or even it's existence. Remembering the lesson Alan had given him about air, Archer responds that even if you can't see something, it doesn't mean it isn't there.

After Archer and the others say goodbye, Alan pushes the boat out to the river and watches them go, looking at them with great respect for their courage and determination. The boat sails on and reaches a spot that resembles Gorgon where the Gorgonites can finally live in peace.

In the PS1 video game, Archer's home world is under attack as Chip has sent his troops there to destroy them once and for all.

There he breaks through their defenses, destroying everything to prevent them from invading Gorgon again before battling Chip himself in the inner sanctum of the main base Garrison Prime. Chip has encased himself in deadly battle armor, but Archer still manages to defeat him and Chip ends up fried to a fritter from the deadly range of one of his own cannons.

When the battle is over, Archer sticks one of his arrows into a tattered piece of the Commando flag, declaring the war finally over.

Archer in his box. 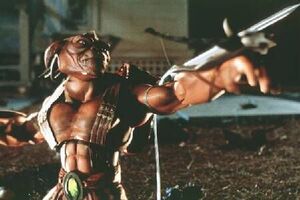 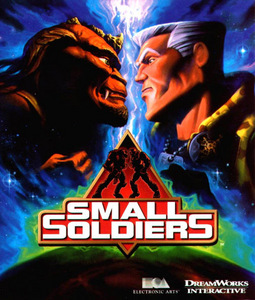 Archer and his arch-enemy Chip Hazard in artwork from the PS1 video game.