Help his other friends, such as hosting the show for Bob.

Teach kids about the love of God.
Prevent the Ninevites from bad things by bring the message to Nineveh for their second chance (Jonah A VeggieTales Movie, succeeded).

Archibald Asparagus, sometimes called Archie for short, is a major character of Big Idea Studios' famous cartoon, VeggieTales. He is also the main protagonist of Jonah: A VeggieTales Movie.

Archibald looks similar to Junior Asparagus, but he wears a bowtie and doesn't wear anything on his head.

Archibald has a taste for class and wants more than anything to turn the usually wacky VeggieTales into a more highbrow production. Archibald was inspired by the Monty Python's Flying Circus character, The Colonel, a stuffy army officer, who occasionally appeared out of nowhere to order the end of a sketch. He has a wife, which he calls Lovey.

His 3D-animated depiction has remained generally the same over the years, except that the vectors have become less-sharp with rising CG technology. He also had a side-mouth in earlier shows. He wears a light gray monocle and a red bowtie. The glass was added when they started using Maya. Archibald first appeared in Where's God When I'm S-Scared? as an interrupter in the silly song, The Water Buffalo Song and King Darius in Daniel and the Lions' Den.

According to jonahmovie.com, his favorite television show is Etiquette Junction, His favorite food is roast beef and Yorkshire pudding, His favorite form of transportation is surrey, His favorite pastime is croquet, His favorite movie quote is "God bless us, everyone." from A Christmas Carol, If he wasn't an actor, he would be an efficiency expert, and He describes himself as tall, dark and grammatically-precise.

Archibald was the main singer in the song called The Biscuit of Zazzamarandabo. Archibald is the main character playing Jonah in Jonah: A VeggieTales Movie and a butler named Willory in The Pirates Who Don't Do Anything: A VeggieTales Movie. Archibald, who has an English accent, is somewhat of a nerd. He often plays leaders of the stories, such as King Darius, the Mayor of Flibber-O-Loo, King Saul, and Alfred. He is eccentric, to say the least. 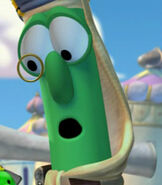