Lead Singer of The Archies

Playing sports
Being with his friends

Be with Betty or Veronica

Archibald "Archie" Andrews is the titular main protagonist in Archie Comics. He is the head of the love triangle for Betty Cooper and Veronica Lodge, the love rival to Reggie Mantle, and best friend to Jughead Jones.

He was created by Bob Montana, John L. Goldwater, and Vic Boom, and first appeared in Pep Comics # 22 in 1942.

The live action version of Archie is portrayed by KJ Apa in Riverdale.

Archibald "Archie" Andrews is the son of Fred and Mary Andrews, and resides in Riverdale where he attends Riverdale High School. His parents are of Scottish descent, and his grandfather, Andy Andrews, immigrated to the Unites States. His grandfather also befriended Moose Mason's Russian ancestor, who emigrated at the same time.

In his childhood, Archie befriended Jughead Jones, who came to Riverdale with his family and was the first person the latter met. The two are very close and loyal to each other, and Archie often has to get Jughead out of trouble due to his antics and schemes.

Archie is known for being in a love triangle with the tomboyish and one of his best friends, Betty Cooper and the wealthy and popular Veronica Lodge, with it being the main drive for most plot lines in the comics. Despite Archie being fond of Betty since they know each for a long time, his moved his attention to Veronica when she moved to Riverdale. Archie is one of the three vocalists and guitarist of the band, The Archies, having Jughead as the drummer, Betty as the one of vocalist, guitarist and percussions, and Veronica as one of the vocalist and keyboardist.

Archie also has to compete for the two girls with his romantic and athletic rival, Reggie Mantle, which has often led to fight each other. Reggie takes any opportunity to play jokes and make comments to Archie, but he has shown to be one of Archie's companion in most situations. Archie has had to battle for Betty and Veronica's affections, as the latter likes to keep him guessing, and never allows him to take her for granted. Despite Betty adoring Archie, he declared that he will fight for Veronica. In The Life with Archie series, which had two alternate parallel story lines, Archi was married to Veronica in one story and Betty in another.

He has shown jealousy when others have been interested in both Betty and Veronica, notably Jason Blossom. Despite Betty and Veronica being his love-interest, he has been interested in other girls, notably Cheryl Blossom, Sabrina Spellman, Valerie Brown, and Josie McCoy. In addition, Archie is friends with the local town genius Dilton Doiley, and his teammates Chuck Clayton and Moose Mason. Moose and Chuck's girlfriends Midge Klump and Nancy Woods become friends of him, but he doesn't fall for them. He's also a friend of Ethel Muggs, but she has a crush on Jughead, who often evades her when he can.

Archie shows himself to have great athleticism, but falls short to teammates Reggie Mantle, Chuck Clayton and Moose Mason due to his clumsiness and tendency to pay more attention to the school's cheerleaders. One of his main interest is his car, having a Ford Model T jalopy named "Betsy", but in other comics it was a Ford Model A. He's also a skilled vocalist and guitarist, being the main vocalist for his band, The Archies. 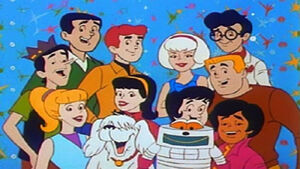 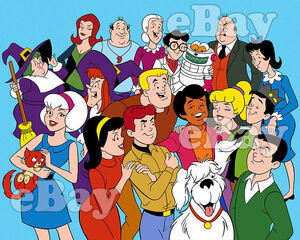 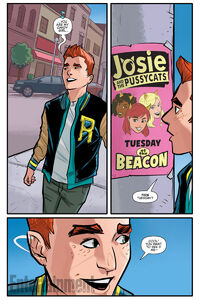 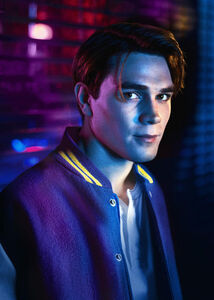 KJ Apa as Archie in Riverdale. 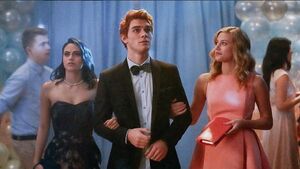 Archie with Betty and Veronica in Riverdale. 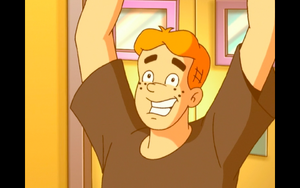 Archiie smiling at the Audience 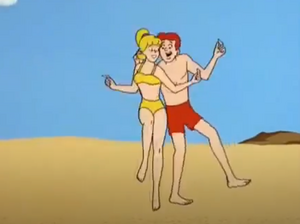