Messing with people that he pulls over.

Chugging syrup
Hanging with his co-workers.

To thwart the drug-smuggling ring (succeeded).

To solve the case of the passive smugglers (succeeded).

Arcot "Thorny" Ramathorn is second in command of the Vermont State Highway Patrol and one of the four main protagonists of the police comedy movie Super Troopers and it's sequel Super Troopers 2. He and his co-workers are stationed near the town of Spurbury, where they prefer to pull pranks on the people they pull over than do police work. In the sequel, they are fired, but re-hired as Vermont State Highway Troopers tasked with replacing Canadian Mounties for a French-Canadian town that was transitioning into a Vermont town.

He is portrayed by the Broken Lizard comedy group member Jay Chandrasekhar.

On a day of doing police work Thorny along with his partner, the rookie state trooper, Rabbit, drive up next to a car, with three college boys driving under the influence. After one of the college boys throws a bag of weed out of the car, the two take advantage of the college boys being high by first driving away, then driving back and acting like they pulled the college boys for speeding, when they were driving slightly under the speed limit, and driving way again, and finally driving back again and revealing that they know the college boys are high, after Thorny pulls out the bag of weed they threw out of the car. Thorny and Rabbit then decide to teach the college boys a lesson by standing in front them while they smoke the whole bag, much to the dismay of the college boys. However, a speeding driver then races pass them then Thorny and Rabbit chase after him with the college boys in their cruiser. Along the way of chasing the driving they are meet by fellow officer, Foster. After the driver stops at a bar, Thorny, along with Rabbit and Foster, go into the bar to arrest the driver, who is revealed to by another state trooper Mac, who was pranking them. Thorny claims that he knew it was Mac, but the latter tells Thorny not to lie in front of Rabbit, because it would set a bad example for the rookie. After Thorny is contacted by dispatcher, Rod Farva, who is an outcast among the other troopers, Thorn tells him to shut up, and then has Mac scare the college boys in his cruiser, by having him drive it and making it look he killed the rest of them.

Danger of being shutdown

The next day at a local diner, Thorny is having breakfast with the other troopers, Thorny then competes with Rabbit in chugging down maple syrup, which Thorny wins. Then Thorny and Rabbit confront the local cops, the Spurbury Police Department, led by Chief Bruce Grady, who the state troopers share a bitter rivalry with, and who make fun of Thorny. When Mac infuriates one of the local cops by throwing two empty maple syrup bottles at him and the two almost get into a fight, Thorny, along with Rabbit and Foster, keeps them apart them, until the state troopers leader, Captain O'Hagan shows up and puts a stop to the fight. Later on at the station, Captain O'Hagan explains that they are one of the stations that could be shut down, due to the state making budget cuts.

Thorny and Rabbit respond to a murder on the highway in a Winnebago, but the Spurbury Police are already there investigating the crime. When they meet to get some information and investigate the scene, a closet starts rustling, and they slowly approach it. They open it and are chased out by an angry pig. Mac and Foster arrive to the scene and Mac goes into the Winnebago and tries to calm the pig down, but fails. The Spurbury Police chief Grady pushes Thorny, and Thorny pushes back, resulting in a brawl between the highway cops and the local cops. Afterwards, they are chewed out by Captain O'Hagan, because their fight with the local cops makes front page news and they are painted as the bad guys, despite Grady starting the fight.

When Mac and Foster stop a semi-trailer truck for skipping a weigh station, they hop in the back to investigate, but the driver of the truck closes the doors and takes off. Two hours later, Thorny and Rabbit show up and let them out of the truck and end up discovering stacks of marijuana. With the marijuana discovered, O'Hagan meets with the officers to brief them and discover more information. During the briefing, Rabbit helps them figure out that there might be a connection between the weed and the lady who was murdered, as the lady had a cartoon monkey named Johnny Chimpo tattooed on her back, while the weed they confiscated had a sticker of the same monkey.

Thorny is watching his son, Arlo while on duty, when a Porsche speeds by on the other side of the highway. Thorny and Rabbit pull the Porsche over and Thorny lets Rabbit do the stop by himself. Rabbit is bribed by the driver with the promise that his wife will do anything he wants, to which Rabbit is ecstatic. Meanwhile, Thorny asks Farva to check the plates and the car comes back stolen. Thorny interrupts Rabbit as he's making out with the German chick and informs him of the discovery and tells him that he's got to arrest her. The two arrest the German couple and have the car impounded. Later it can be seen that the German couple is staying with Thorny and his girlfriend.

Inspired by Mac's stunt, Rabbit disguises himself and uses the stolen Porsche to play the same game with Mac, but he is caught by Farva, who happened to be getting gas at the time. Afterwards, Rabbit is demoted to radio and Farva is put back on the road, much to Thorny's chagrin.

Foster finally manages to seduce the Spurbury Police dispatcher, Ursula Hanson, and while getting ready to have intercourse in the Winnebago, discover a huge stash of pot hidden underneath the bed. He carries one of the bags back to the station where he shows his team and comes up with a bogus story about how he discovered it.

While pulling over a van, Farva wants to play one of the games that he hears his co-workers talking about, to which Thorny tells him of the time Mac bet Foster that he couldn't say "meow" ten times while issuing a ticket. Farva unimpressed, steps up the game by calling the driver of the van a "chicken f**ker." Afterwards, the two go to a fast food restaurant named Dimpus Burger where the cashier gets on Farva's nerves. While they're eating their food, Farva discovers a hole in his cup after taking off a contest peel-away sticker, and proceeds to attack the cashier, resulting in him being arrested by the local cops and demoted to janitor by a furious O'Hagan.

After Thorny and Rabbit don't find anything while watching the cartoon Johnny Chimpo is from, Mac tells them they should take another look, and gestures to one of the bricks of weed. The four smoke some weed and watch the cartoon, eventually getting the German guy to translate. O'Hagan catches them and tells them to get back to work and to put the German guy back in his cell, to which Rabbit does and comes back with lipstick on his cheek. O'Hagan tells because of what Farva did their is going to be shutdown but Thorny and the others still do not take the situation seriously. Then O'Hagan fed up with their antics, tells them to have their fun while he looks for a new job.

When Foster meets with Ursula at a restaurant, the two talk about how they're going to get the rest of the marijuana out of the Winnebago, to which Ursula says she can help them by letting them into the impound. The next day, when they are at the firing range, Foster informs his team of the plan and they talk it over while Thorny helps Mac test a bulletproof protective cup. O'Hagan arrives and they also cue him in on the plan.

While the Spurbury Police, O'Hagan, Mac, and Farva at are a banquet held for Governor Jessman, Rabbit uses a costume that makes it appear like he's having sex with a bear in some forested area. This distracts Smy and Burton, the two local cops that were left at the station, when they get multiple calls about it. With no one left at the station, Thorny and Foster sneak into the impound and drive the Winnebago to the banquet. However, when they get there, they find that someone told Grady about the stash and he and his officers take credit for the discovery instead, resulting in the last ray of hope for the troopers to save their station. Foster confronts Ursula, assuming that she used him and sold them out to Grady, to which Ursula tazes him. Mac sees this and thinks that Foster is a traitor.

With their station closing, O'Hagan and his officers have some shots, until they hear a noise coming from the locker room. There they find that the actual traitor was Farva, who sold them out and joined the Spurbury Police. Angry and drunk, the former officers handcuff Farva to the toilet and steal his cop car. They take the car for a joy ride, pulling people over, and vandalizing Grady's property. Foster uses the radio to apologize to Ursula, who tells them of a way to get back at the Spurbury Police and tells them to meet her on Route 09 of Okeechobee Road. While waiting for her, Galikanokus drives by in a semi-truck and they give chase, only to be stopped by Farva. After a confrontation, Farva admits that he sold them out because he felt unappreciated by his co-workers. Thorny convinces Farva to help them stop the smugglers, by saying that he could be a hero and the team follows the truck to a remote area.

There at the remote area, they see Galikanokus meeting with his supplier. The team tries to come up with a plan until Grady and his officers show up. Thinking, that the cops are there to arrest the smugglers, Farva runs to join his new team in the bust. Ursula shows up and admits that she knew of her co-workers' part in the smuggling ring and admits that she used Foster to take them down, but grew to like Foster. The team then uses Farva's police cruiser to draw the fire and get the corrupt cops to waste their ammo. Thorny and Mac pop out of the trunk and the team get into a drunken fist-fight and defeats the smugglers. Afterwards, the team all gather at O'Hagan's house to read a letter from Governor Jessman, which informs them that they will still have to close down their station. 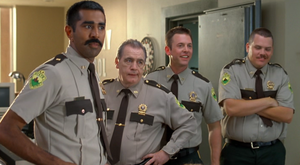 Thorny and the crew, excluding Foster and Mac. 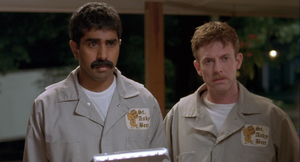 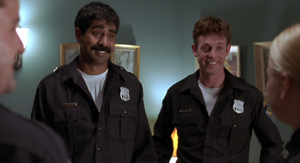 Thorny and Rabbit reveal themselves as Spurbury Police officers. 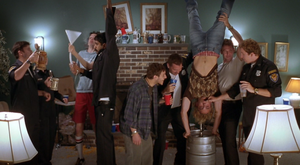 Thorny partying with his co-workers and the three college kids they pulled over at the beginning.
Add a photo to this gallery

Retrieved from "https://hero.fandom.com/wiki/Arcot_%22Thorny%22_Ramathorn?oldid=1673929"
Community content is available under CC-BY-SA unless otherwise noted.