She was voiced by Chiaki Takahashi in the Japanese version, and by Laura Post in the English dubbed version.

Woman of loud (Neptune says "outdated") black robe which appears along with the laughter. We have a warlike character, and keep watch relentlessly the Neptune. Yet mastermind, where is I also have one side that does not hate. "Re; Birth1" In the original story street, sometimes garbled to other goddess in the copy ability.

The final boss other than true end route, also set the appearance different from the previous work of Arfoire. When the resurrection, it is said to be destroy all of Gamindustri. 's False god that entity does not have originally, but has been resurrected by the behind the scenes of CFW Magic. And the hand of the appearance of four this vessel, and four legs, profile with things like a giant mouth and women beast human upper body, but speaks fluent in the event line of the battle lines also only not broken (some root ), the more the Magamagashi is is said to be "if you know this figure not think trying anyone be resurrected" to IF. Its essence if even destruction is Gamindustri, presence and serving as the incarnation of destruction genuine that the means is not willing. Presence and price of the magic sword also knows, but choose a dare suicide in the original Gaiden, to confront the Nepgear remains of this figure in the new scenario. Roundness than the routes lost to Nepgear us remain incomplete state, but (not damaged because of the thoughts body) Arfoire body of true end route will be escape from a variant of the vessel, she Gamindustri Graveyard fused to and became a true Arfoire. It should be noted that, this time, the figure of has the same design as the main Delphi eggplant Gamindustri Graveyard, but details are unknown.

The name is the same as the previous work of the final boss, but the appearance of this work is the same as the female beast people figure that was in front of the variant of the vessel. Weapon double-edged spear, but fighting style is also similar to the goddess and CFW magic, its power is uneven. Appearance of true Arfoire is feminine without I take also, it was said to be "was a good man" to Noire. Majikon is like running under the force of Arfoire, patterns to be junk not work at all when Arfoire disappears. While it is the final boss of the true end route, even without clear the true end, to fight its enhanced version in the second and subsequent lap Coliseum (the same name) the higher version of the "Delphi eggplant".

One of the Seven Sages. It is a nemesis of throughout the series. Design is one of the founder, it is shaken and "came back" to the logo. While's another presence and previous work, strong hostility is (Even though the presence of a parallel world) for the Neptune alive and well. The sides also reasons not well understood himself. Remember sympathy to the philosophy of the goddess exclusion only, to participate in the Seven Sages. However, also remember the frustration in Madorokko vertebral strategy. Unlike the preceding two installment, its identity is a mystery. Normal appearance and personality close to the founder. Personality is swayed to Copypaste that has been remodeled, and hate the kidnapping strategy, the last is such challenge to Neptune in a surprising ploy, also one side you do not hate has been resurrected. The other, completely results was killed torment to thoroughly iris heart that is broken, face to become strangely cheerful become a face character over a long period of time, such as can cause mental collapse in the form of, Crow unceasing. The same as mk2 version in combat form, but the first match of form appearance of true Arfoire, 3 round eyes are those the crime God Arfoire. Although it is not the final boss this time, it is not wearing reached the true end route and do not generate four races eyes (sub event handling). Then, it has been cut and fill the eggplant farm that bought up for the above ploy (unknown what happened animosity to the goddess). From the above configuration, in the battle come aimed at the Neptune on a priority basis. 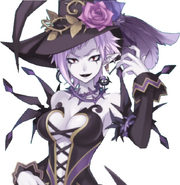