Helping Vincent Chase to run movies, having sex with his wife Melissa

Wrathful Anti-Hero
Ari Gold is one of the main protagonist from the TV Series Entourage. He is a minor antagonist and anti-hero.

He is a Hollywood super-agent, and the former representative of Vincent Chase. Ari was also the co-owner of the Miller Gold Agency with his one time rival Barbara Miller, before he left the agency to live with his wife Melissa in Italy. He also has a son named Jonah and a daughter named Sarah.

Although at times he can be arrogant and selfish, sometimes he is also good and reasonable.

He is portrayed by Jeremy Piven. 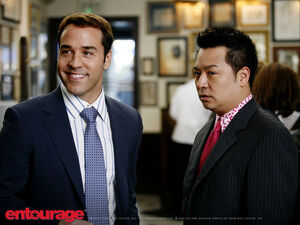 Ari Gold and Lloyd Lee
Add a photo to this gallery
Retrieved from "https://hero.fandom.com/wiki/Ari_Gold?oldid=2009011"
Community content is available under CC-BY-SA unless otherwise noted.