Leader of his own Freedom Fighters (formerly)

Helping his friends.
Proving his loyalty as well as his honor.
Showing respect to others.

He was voiced by Dorain Harewood who also does the voice for Mr. Thicknose in The Land Before Time.

Ari mysteriously shows up in the Great Forest being chased by Swatbots. After Sonic rescues saves Ari they find out that he was a leader of another Freedom Fighter group that had only seven members but they were kidnapped by Robotnik. He mentions that he is trying to rescue his Freedom Fighters but Sally doesn't trust and believe him but Sonic does. The young hedgehog decides to help Ari which Sally believes is a mistake with Rotor's help Sally learns the truth from the Swatbots that Ari is working for Robotnik. Sally learns she was right and has Dulcy fly her to Ari and Sonic's location to tell Sonic the truth about Sonic. But by the time they get their they are to late Ari already lured Sonic into Robotnik's trap.

Sonic then learns the truth that Ari was forced to lure Sonic into a trap in order to save his own Freedom Fighters from Robotnik. With Sonic trapped Ari goes to reluctantly report back to Robotnik so he will release Ari's team. Sally and Dulcy see Ari come out of building without Sonic they follow him back to Mobotroplis. Sonic then learns that Robotnik has him trapped in a very dangerous life and death game of pinball if Sonic loses he will be trapped in the Void. Later Ari reports back to Robotnik telling him about the news which makes Ari angry telling this to Robotnik he then demands is an upset voice for Robotnik to release his Freedom Fighters. As promised Robotnik brings Ari's Freedom Fighters to him and releases them however Ari sees Robotnik has broken their deal and robotizied Ari's team although Robotnik only shows Ari that he robotizied only three out of six of Ari's friends. Ari gets even more mad with Robotnik Dulcy and Sally then come out of the out of the vents to rescue Ari who helps them fight the Swatbots and get out of Robotniks base and back to Sonic. Sally thanks Ari but he politely tells her she shouldn't thank him and that should thank her. Ari apologizes to Sally for what he has done Sally tries to go rescue Sonic but Ari decides to go rescue him instead to redeem himself. Ari tells Sally to stay back not willing to let her risk her own life Ari rescues Sonic but as he saves him Robotnik starts the count down to destroy the base. As they try to escape Ari gets pulled right into The Void but before he gets sucked in he tells Sonic about a list of Freedom Fighters the king has made that can help them bring down Robotnik.

Sonic and Sally meet Ari again when they get trapped in The Void and find the king along with Naugus. They manage to rescue Ari but find out that they can't rescue Sally's father and Naugus just yet so they have to leave them. Later Sonic, Sally and the other Freedom Fighters go to recruit the Freedom Fighters on her father's list they learn that Ari and his friends were one of the groups on the list but now only Ari is left. They learn about the Wolf Pack being on the list and go to recruit them after they find the Wolf Pack they return back to Knothole where Ari and the others are waiting for them. Ari then shows up again later with the Freedom Fighters from the king"s list to stop Robotnik and his Doomsday plan. They succeed in defeating Robotnik as he is destroyed along with the Doomsday Project. With Robotnik gone, he can finally restore Mobotroplis and the rest of Mobius and they can also finally find away to rescue the king so he can reclaim his throne. However since Robotnik escaped it is not the last time they will see him but with out a base, army and Robotnik is powerless and nowhere to be found.

Ari is an anthropomorphic ram. He has light gray wool, dark gray eyebrows, dark gray hair, a small dark gray beard, and a pink nose surface. He also has pale yellow curled horns and golden eyes. For clothing and footwear, Ari wears a red shirt, a black belt with a yellow buckle, and black gloves and boots.

Ari The Void.jpg
Ari in The Void. 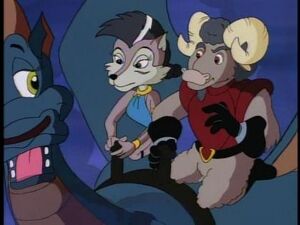 Ari and Lupe the Wolf riding on Dulcy the Dragon.