Aria H. Kanzaki is the main female protagonist and title character of the light novel and anime series Aria the Scarlet Ammo. She is a second year transfer student at Butei High School and an S Rank Butei, as well as the partner of Kinji Tohyama. She is half-British and half-Japanese and her grandmother earned the title of Dame, making her a noble. Early on, it is revealed that she is a descendant of Sherlock Holmes, with the H. in her name standing for Holmes.

Aria was born on September 23, 1992, from an Unnamed Man and Kanae Kanzaki, her father's fate is unknown.

Aria has a past as a Butei in Europe, namely England, and this is attributed to her lineage as a descendant of Sherlock Holmes. Aria seems to have started becoming a Butei there, and so this is most likely where she has earnced her title of Quadra and her S-Rank. It has been mentioned that she has received the title of "Dame" and even been opportioned a piece of territory she recalls to be called "Baskerville".

She has ankle-length pink hair tied in two pigtails that reach her knees. Her ponytails are decorated with red horn-shaped hairpins. Aria also has big red (Pink in the AA series) eyes. She mostly wears the standard uniform of Tokyo Butei High School, and wears black thigh-length stockings as well. Aria hides a pair of guns under her skirt. She has a rather big forehead, something she's proud of and Kinji tends to tease her about. To better display it, she wears a gold heart-shaped hair pin (Pink in the AA anime) that holds her bangs up. However, she received a scar on her forehead during a mission against the Butei Killer so she was forced to cover up her forehead.

It is later revealed that her hair and eye color are originally flax blonde and blue respectively, and the drastic change was caused by a Hidan bullet embedded in her body. The Hidan bullet also has the ability to extend a person's lifetime, but at the same time, it will heavily delay all growth in one's body. This is why Aria, despite being 16 years old, has a childlike body. Aria has a height of 142 cm (4'8") and weighs 34 kg (75 lbs). She has a complex about her height and flat chest.

Her hair style was revealed by Sherlock Holmes to be the common hair style for all women of the Holmes family. The reasoning behind it, according to Kinji, was so Sherlock, and anyone skilled enough, could read the movements of the woman based on the movements of how their twin tails move about. It can be inferred that the actual purpose was different after Aria and Kinji's intrusion on IU, her long twintails serving to protect them from free fall thanks to the irokane in her body.

Aria is a haughty girl who prioritises herself most of the time. She is a very loud and outspoken person, and always expresses her opinions shamelessly. Unfortunately, this pride is one of many traits she has which prevent her from focusing properly on social interaction and human empathy, which in turn kept her from having true allies until she met Kinji. Indeed, Aria is shown frequently to be socially inept, as she doesn't seem to see anything wrong with a girl staying the night in a boy's dorm room and believes merely being kissed can cause a girl to get pregnant, though she was told the latter by her father.

Aria is often very bossy and immature, such as when she more or less barged into Kinji's dorm room and declared him her slave, though it's later revealed that she was simply too proud to say "partner." She is incredibly short-tempered, often threatening to shoot Kinji or anyone else who annoys her. What makes her angrier than anything else, however, is whenever someone brings up relationships. Aria is a celibate (someone who has no interest in romantic or sexual relations), claiming that relationships are nothing but a waste of time, and even goes so far as to look down on people who think otherwise. Plus, Aria will distance herself from people who have hurt her really badly or betrayed her as shown when she ends her friendship with Reki after she claims Kinji as her husband and sees Kinji as a traitor for trying to make peace with his half-sister Kaname, so soon after she had tried to kill her and the other Baskerville girls, creating a deconstructing relationship between the two.

Aria is also unshakably determined, and makes it clear early on that she hates words like "tired" and "impossible", claiming they're just excuses people use to hide that they are scared of their full potential. However, Kinji suspects her attitude towards those words are actually the result of being an aristocrat and growing up in a society of "winners", which has resulted in a lack of understanding for those who are weak, poor or hopeless. She is also very stubborn and prideful and hates to admit when she's made a mistake, to the point that she'll often demand proof from people before she'll believe something that goes against her initial assumption. In addition, she is very much the kind of person who doesn't take 'no' for an answer, going so far as to stay the night in Kinji's apartment until he reluctantly agreed to become her partner.

Despite her immaturity and egotistical attitude, Aria is very dedicated to her loved ones and cares for them deeply, especially her mother and Kinji. She is extremely loyal to and trusts her fellow Butei, since the first rule of being a Butei is to put one's faith in others, and is even willing to risk her life to save someone she doesn't know, which is how she and Kinji first met. She's also aware that she can be overbearing at times, though she nevertheless insists that it's for her friends' own good. She loves cute things and sweets, especially peach buns, eating at least seven on the night she met Kinji. Despite her battle skill, she is scared of thunder and is still able to feel fear whenever she goes too far like when Kinji gets really angry. In general, Aria is a lot more fragile than she likes to admit; although she pretended she didn't care at the time, Kinji saying he despised her shortly after they met really hurt her and it takes him kissing her to convince her that he doesn't.

While she's certainly intelligent, Aria inherited none of her ancestor's incredible deduction abilities, and is called the "Defective Holmes" as a result. Interestingly, she seems to have no problem with admitting this flaw, despite her otherwise prideful nature. To make up for this, Aria has a tendency to rely on her intuition, such as when she is convinced for certain that Shirayuki is being targeted by Durandal. Unfortunately, due to her inability to explain her theories logically, no-one ever believes her, much to her endless frustration. Aria has also shown the capacity to learn from her mistakes and know her limits, as shown when she gets Shirayuki to form a trio with her and Kinji after they defeat Jeanne, as they were only able to defeat her via the three of them working together. She's more than capable of sympathy as well, such as when she lashes out at Riko for trying to get her to help her steal a rosary that belonged to her mother, only to regret it upon discovering that while her mother may be in prison for crimes Riko committed, Riko's mother is dead, and the rosary is the only thing she has left of her.

Aria being taken care of 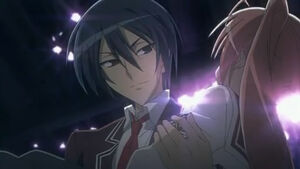 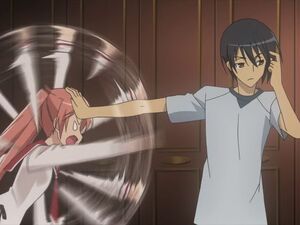 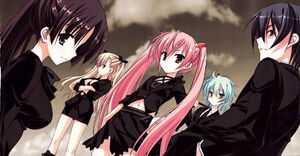 Team Baskerville
Add a photo to this gallery

Retrieved from "https://hero.fandom.com/wiki/Aria_H._Kanzaki?oldid=1669259"
Community content is available under CC-BY-SA unless otherwise noted.