Aria T'Loak is an Asari in the the Mass Effect franchise. She is the ruler, queen, leader, and whatever you prefer of Omega, one of the biggest locations of the Mass Effect universe. She serves as the deuteragonist and anti-heroine of the Mass Effect 3 Omega DLC. Outside the DLC, however, her role is fairly minor, serving as little more than a mission booth.

She was voiced by Carrie-Anne Moss, best known for her role as Trinity in the Matrix trilogy.

Aria had a colourful past prior to her arrival on Omega. When she did arrive on the station, she worked as an exotic dancer at the Afterlife Club. However, this was merely a clever cover for Aria. Eventually, she killed the owner of the Afterlife Club and claimed ownership. She continued to form alliances and consolidate power before finally overthrowing the 'ruler' of Omega: the krogan she deposed, whom she derisively named The Patriarch, was spared as an example of her power to others.

Aria is very authoritative of her reign on Omega, ruling the station with an iron fist. Her organization is quite strong and her men extremely loyal. Almost nothing that happens on Omega escapes her notice, causing mercenary groups to think twice before crossing her. No matter who she deals with, she makes sure she has the upper hand in the bargaining. She has centuries of experience dealing with people who thought themselves being in better positions. Simply by observing a person, she can easily read a lot about them and usually immediately knows when they are lying. She is determined to always get the last word in a conversation, reinforcing her position and authority as Omega's ruler.

She first appeares in Mass Effect 2, where she helps Shepard find Archangel and Mordin Solus. She also has several side missions where she is a part of.

In Mass Effect 3, after Cerberus has taken control of Omega, she allows Shepard to use Omega's gangs to help fight the Reapers. She also has a DLC in which she and Shepard take back Omega. 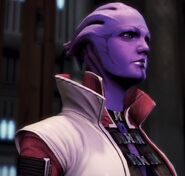 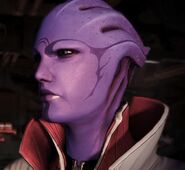 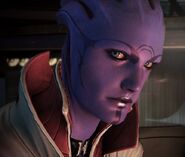 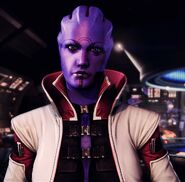 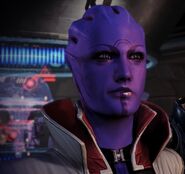 Add a photo to this gallery
Retrieved from "https://hero.fandom.com/wiki/Aria_T%27Loak?oldid=2128572"
Community content is available under CC-BY-SA unless otherwise noted.