Arina Makihara is the one of the main heroes in the series, Waku Waku 7.

Arina Makihara is a 17-year-old girl with bunny ears, clad in a unitard and short-sleeve jacket. She pursues the Waku Waku Balls to achieve her dream to have a nice love. She is said to have learned to fight in an extracurricular compulsory class in high school, and is often seen with her friends and little brother, who are, like her, all parodies of typical half-animal/half-human characters from several shōjo manga and anime.

A capricious yet head-strong girl who never gives up and never quits easily. She likes her friends and seems to know Rai very well from school. 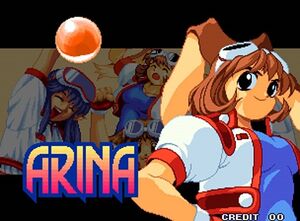 Add a photo to this gallery
Retrieved from "https://hero.fandom.com/wiki/Arina_Makihara?oldid=1767575"
Community content is available under CC-BY-SA unless otherwise noted.