Arisa is a Character of the Shadowverse and serves as the main protagonist.

An elf girl who continues his daily training as a forefather guardian as much as possible. I will leave the forest to save my close friend Rosalia who was taken away by someone.

Standing position which can be called a signboard character of Shadowverse. The story of the tutorial is treated like the day before her story. In this case I will fight with her best friend Rosalia (elf class of course).

It is in the form of the image of an old-fashioned elf, which is an elf ear with long blond hair and long hair. Eye color is green, red ribbon is impressive. Equipment is light in weight, equipped with short weeds etc. in addition to Bow and Arrow of the main weapon. In addition, it is one of the features that carries a cloak (Cape), but it is often omitted in illustration by Fan Fiction.

Bright, friendly, gentle, roughly innocent personality, but the concern that Rosalia who was a close friend has been taken away, may not be able to help her is dark in my mind.

"Elf" deck with her as the leader, "The Netherworld Elf" which trumps the "road to The Netherworld" that fulfills the triggering condition by storing a large amount of cards in the graveyard among the derived decks is the mainstream of Elf. Because of that, it is said that some people "fainted dark." There is no doubt that this class is what it is like to burst Fairy easy to mass - produce in a graveyard like a Necromancer. 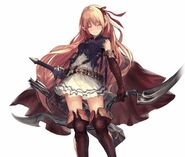 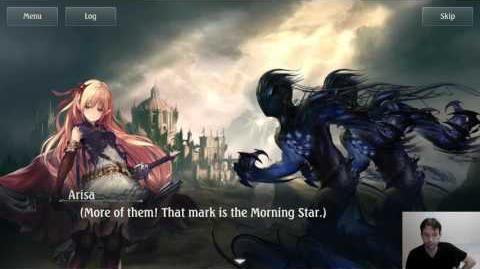 Shadowverse - Arisa - Modo História
Add a photo to this gallery
Retrieved from "https://hero.fandom.com/wiki/Arisa_(Shadowverse)?oldid=1488828"
Community content is available under CC-BY-SA unless otherwise noted.