Start a Wiki
Arkham Asylum is protected by many Security Guards from many types and armed with different equipment. Masked ones are the lowest ranking, raincoat ones guard the outside and ones with uniforms without armor and masks are officers who are higher ranking. Guards are often new trainees hired by the asylum's warden; Quincy Sharp.

The majority of the Security Guards were present at the asylum's Intensive Treatment facility, as Joker was recaptured by Batman and were ordered to keep the facility under control as well as carefully guard Joker. While being transferred through the holding cells, Joker managed to escape and broke out many inmates including Blackgate Prisoners who worked for him. Joker, Harley Quinn and the Blackgate Prisoners as well as traitor Security Guard, Frank Boles, managed to kill the majority of the guards in the Intensive Treatment, then escaped, slowly controlling the Island by one facility to another.

Outside, some guards survived and were still in control of the area, but thugs still killed some guards but guards managed to kill at least two Blackgate Prisoners. Later on when Batman exited the Medical Facility, the majority of the guards were killed and thugs gained control of all three areas on the Island. Some guards were taken hostage which Batman managed to save and take down their captors.

When Batman defeated the TITAN-enhanced Joker, guards gained control of the Island. Blackgate Prisoners were recaptured and the Joker as well as TITAN henchmen were cured. Poison Ivy was taken back to her cell, Quinn remained in the cell Batman took her to and Joker was taken to his cell. Victor Zsasz, Bane, Killer Croc and Scarecrow's fates were unknown. 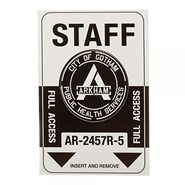 Security Guard with Dr. Young
Add a photo to this gallery
Retrieved from "https://hero.fandom.com/wiki/Arkham_Asylum_Security_Guards?oldid=1637297"
Community content is available under CC-BY-SA unless otherwise noted.