Arlene is one of the three tetartagonists, alongside Liz and Squeak, in the Garfield comic strip by Jim Davis. She first appeared on December 17, 1980, her name was first mentioned one day later.

She last appeared on May 20, 2012. Arlene appeared regularly in the strip in the 1980s but rarely appears in it now and she's the love interest of Garfield.

Arlene is Garfield's girlfriend who can successfully crack jokes at Garfield's expense on a regular basis. She was slim, elegant, long-tailed, pink-furred cat, with a skinny neck and distinctively big red lips, who seems to be the only one of her kind living in the world.

Earlier in the strip's run, she also had a big gap between her two front teeth.

She once wished that her relationship with Garfield would take a few steps forward, but Garfield did not seem to notice.

Garfield once quipped in one of the the early strips, that he and Arlene have an apparent love-hate relationship: Garfield loves himself, and Arlene hates that.

Once, while Garfield was waiting for Arlene to come to a date, another beautiful cat walked up to Garfield and greeted him.

At the same time, Arlene appeared and quickly got enraged. In the next strip, Arlene called Garfield a "cad", but Garfield cleared up the misunderstanding and Arlene forgave him.

Arlene did not appear in the animated series (as she was replaced by Penelope Pussycat), with the exceptions of "The Legend Of The Lake" and a cameo appearance in the episode "Remote Possibilities".

In the book, "Garfield's Judgement Day", it is revealed that she is a stray cat, which she had never revealed to Garfield, until emergency situations brought it to light.

She does appears in the film Garfield: The Movie voiced by Debra Messing. In the film, she is a female Russian blue cat who lives in the neighborhood and dislikes Garfield because he's selfish and for locking Odie outside leading him to run away. She doesn't make an appearance in the sequel.

She appears frequently in the French/American CGI animated show, The Garfield Show. 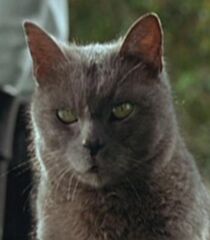 Arlene in Garfield the Movie 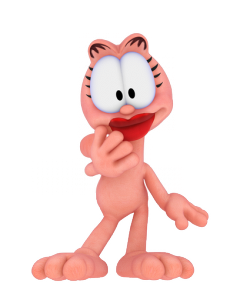 Arlene in the Garfield show 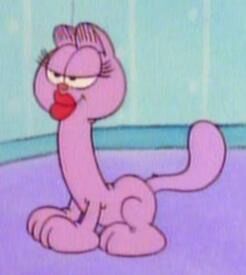 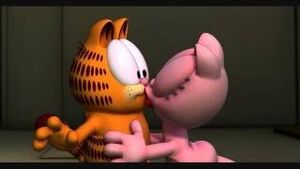 Add a photo to this gallery
Retrieved from "https://hero.fandom.com/wiki/Arlene?oldid=2117537"
Community content is available under CC-BY-SA unless otherwise noted.