The Magic School Bus at the Waterworks (1986)

Arnold Pelstein is one of the ten deuteragonists and a students of Ms. Frizzle's class of The Magic School Bus. He does not like going to Ms. Frizzle's field trip because he wants to have a real better field trip instead of his teacher's magical field trips that the school bus takes him and his classmates to a magical educational adventure in the world or in the environment in the school field. At best he is usually an unwilling participant. Despite this, he has shown bravery when he's needed to, and he's very loyal when it comes to his teacher and his classmates. He is also Phoebe Terese's love interest.

Arnold introduces his cousin, Janet, to his class in "Gets Lost In Space," and he tries to keep the peace when Janet's arrogance sours the rest of the class. It's when Janet talks down on Ms. Frizzle that he shows his loyalty to his teacher and suggests a field trip to the "bigger" planetarium, showing Janet that "nobody is better than Ms. Frizzle." Arnold unknowingly eats the class in "For Lunch." He's happy to have stayed behind while the others go on a field trip, but after finding out where they went, he swears never to miss a field trip...at least, not until after the "next one" (Ms. Frizzle's dinosaur dress foreshadowing their next trip). He and Keesha find themselves in a difficult situation when they forget their partner report in "Gets Eaten." He loses Wanda's bullfrog, Bella, in "Hops Home" and tries to keep her out of harm when they look for Bella, as Wanda's too distracted to realize she's about to walk off of a tree or get swept down a river. In "Meets the Rot Squad," he tries to convince everyone to leave the rotted-out log on the abandoned lot the way it is. Everyone is shocked when he suggests a field trip to the desert in "All Dried Up" after Phoebe declares they need to help the animals there. He feels confident about the trip, thanks to his Field Trip Survival Guide.

While on a field trip to a dinosaur dig in "The Busasaurus," Dr. Carmina Skeledon lets Arnold see the fossilized egg Ms. Frizzle found. He still has it when they go back in time, and when he lets Phoebe look at it, she loses it to an Ornithomimus. He ends up squaring off with a Tyrannosaurus Rex after Ms. Frizzle makes him giant-sized, saving the class. In "Butterfly and the Bog Beast," he's the only one not to side with Janet against Phoebe when the former suggests "Bog Beast" for the school mascot. His main reason is because he doesn't know what a bog beast is. He's caught by his crush, Tiffany, when he and Wanda get water from the girls' bathroom in "Wet All Over." Despite the embarrassment, it's implied at the end that Tiffany likes him, too. He serves as Ms. Frizzle's defense attorney in "In a Pickle." While in the bus' gas tank, Arnold says that he hates the smell of gasoline and was out on the engine telling the class what was going on while they were in the cylinder in "Revving Up".

After losing the heat from his hot cocoa, Ms. Frizzle takes the class to the Arctic ("In the Arctic"). When Ralphie, Phoebe, Liz, and the bus get stranded on an ice flow, Arnold makes it his responsibility to save them while also trying to keep everyone else warm. He and Dorothy Ann compete in the 10th Annual International Show & Tell Competition in "Shows and Tells," but instead of bringing a rare collection of rocks, he brings some artifacts he found in his attic that belonged to his great-aunt, the famous archeologist Arizona Joan (a parody of the film character Indiana Jones). In "Rocks and Rolls," he fears that the statue he was supposed to carve (not by hand) is ruined, but instead, the rock slide the class caused on the side of a mountain carves a monument of the town founder. For the class' last day before winter break in "Holiday Special," Arnold made the suggestion they collect recycled goods to take to the recycling center. He accidentally puts Wanda's beloved toy soldier in the pile, causing her to blame his "crummy idea" and wish that recycling had never been invented.

Ralphie teases Arnold in "Meets Molly Cule" after the famous rock star, Molly Cule, calls him "Sugar.", this caused Arnold to blush. However, this is what helps him figure out that her hood ornament was made of sugar. In "Cracks a Yolk," Arnold helps hatch the chick the class planned to replace Mr. Ruhle's lost rooster, Giblets, prompting Dorothy Ann to kiss him. When Giblets returns, Mr. Rhule gives the chick to Dorothy Ann and Arnold, the latter suggesting they name it "Arnold, Jr." In "Goes Cellular," he's completely orange on the night he's to receive GRANITE's Rocky Award. The class tries to compare his skin to Phoebe's, only to learn his favorite snack food made him turn orange. He's happy when Ms. Frizzle's electrician wants to buy all the light bulbs the class was trying to sell for Valentine's Day ("Gets Charged"). He becomes a fox along with Phoebe and Tim in "In the City," and he's partners with Phoebe in "Takes a Dive". 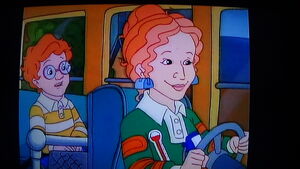 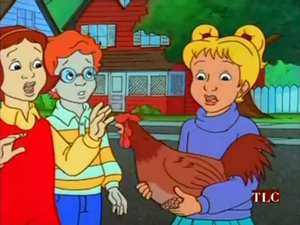 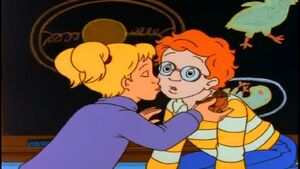 He and Dorothy Ann Kissing 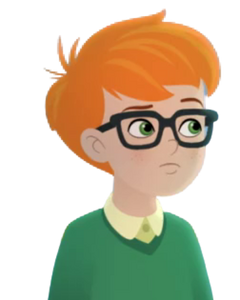 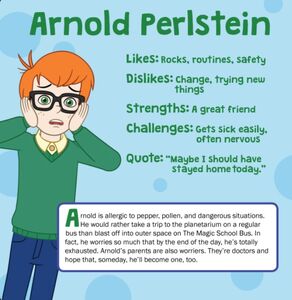