Drakan: Order of the Flame

Dragon of the the Order

Arokh is a living legend who served in the Order of the Flame over 600 years before Rynn’s time. He is a fire dragon of the Elder Breed and originally came from the warmer, south eastern continent where he was born along with his two brothers and one sister. When he was very young, he decided to seek new lands and adventure and travelled with his father to Surdana, the district in which Rynn’s village is situated. His father soon joined the Order leaving Arokh to more or less fend for himself which formed an instant bitter relationship between father and son. Angry and disillusioned and unable to travel home again, Arokh settled down and some years later, met Heron, an early 40’s aged warrior who served as a protector for his village and its people. After being friends for a few months, the two decided to bond and become members of the Order of the Flame, which had been around for many years ensuring peace throughout the world. Together they served in the Order for a couple of hundred years – Heron benefiting from Arokh’s long life span and within time they became highly respected and skilled warriors.

Arokh was bonded to Heron in the Order. They both fought in the war against the Dark Union. Heron died in the war after banishing Navaros, leader of the Union, out of the world. With his master dead, Arokh retreated to his lair, where he fell into stone sleep for six-hundred years.  He was re-awakened by the warrior woman, Rynn, who needed his help to save her brother and avenge her village. He again underwent the ritual of the Bond, uniting his soul with Rynn's.

It is unknown when Arokh was born, but his past is considered a legend because many already knew about Arokh including Rynn, her village's Priest, and Ranwolfe His rider was the one who killed the Dark Union's leader.

Draken: Order of the Flame

When Arokh was awakened by Rynn, he showed rage upon learning she woke him to help her rescue her brother, but was impressed by her bravery. After the Bonding Ceremony they set off on an adventure to rescue her brother and defeat the Dark Union.

After defeating the Dark Union, Rynn and Arokh returned to Rynn's Village in hopes of finding ssurvivors of the Wartok attack. While searching, he "heard" a call of the Order of the Flame. He was forced to answer telling Rynn to meet him at Surdana. When she arrived, Arokh had gone to find the Tree of Mourning. He succeeded, but couldn't get close enough because the trees were too dense for him to reach it. He then was forced to ask Rynn to go retreive the needed rune. After this they set out on a journey to open the four Gates and awaken Mala Shae thus restarting the Order and bringing Drakan to peace.

Like most dragons, Arokh can fly and use incredible breath weapons against his foes. Each of his breath attacks have two different attacks that can be used in various situations. Below is a list of breath weapons that are at Arokh's disposal.

Arokh is also highly skilled with flight. He is able to easily carry humans on his back and fly a the same time, even during combat. He also has very good accuracy with his breath weapons while he's in flight. 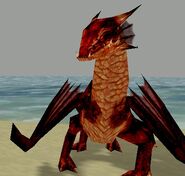 Retrieved from "https://hero.fandom.com/wiki/Arokh?oldid=1616946"
Community content is available under CC-BY-SA unless otherwise noted.