Knight of an unnamed kingdom (formerly)

Skills with a lance
Horseback riding

Serve the lord of his unnamed kingdom (gave up)

Arran is a supporting protagonist in Fire Emblem: Shadow Dragon and the Blade of Light, Fire Emblem: Mystery of the Emblem, and their respective remakes Fire Emblem: Shadow Dragon and Fire Emblem: New Mystery of the Emblem. A knight who took up residence in an Altean village, Arran is good friends with the mercenary Samson. However, the village Samson inhabited had bad blood with Arran's village, and while both men were willing to assist Altea's Prince Marth during the War of Shadows, choosing one would cause the other man's village to close its doors to him. By the time of the War of Heroes, Arran replaced Jagen as Captain of the Altean knights, implying that he was Marth's canonical choice.

Arran is a young man with a lean, sharp face and a long blond mullet. He wears a black and dark red coat with a white-furred finish, black pants, and brown boots. Over his clothes, Arran wears upper armor, including spiked shoulder pads, and thigh armor with gold trim. In Shadow Dragon and the Blade of Light Arran's armor is red, but from Mystery of the Emblem onward this armor is purple.

As a knight of his former kingdom, Arran was intensely loyal to both country and liege. After committing a heinous act at the orders of his lord, however, Arran became bitterly disillusioned with the ideals of knighthood and left. It was in serving the compassionate Marth that Arran felt that he regained his purpose as a knight, for he was truly believed in the Altean Prince and his cause. This devotion was strengthened after Arran contracted a terminal illness, and he threw himself helping Marth achieve his dreams, preferably sacrificing himself in the process.

Born in an unnamed kingdom in Archanea, Arran joined its knighthood, eventually becoming its captain. However, one fall the kingdom's harvest was a poor one, and by winter the peasants were starving and resentful towards the nobility. When their anger erupted into open revolt, Arran's liege commanded him to send his squadron and put down the rebellion. Arran complied, and the knights slaughtered every peasant they came across, Arran included. Disgusted with his actions, Arran resigned from his position as knight-captain, left his kingdom, and wandered Archanea in search of a cause he believed in. His journey led him to a small village in Altea, where he befriended a mercenary named Samson who lived in a neighboring village. Unfortunately, Arran and Samson's villages soon entered an ugly feud.

The two villages' bad blood persisted even as the country of Gra betrayed Altea and secured its castle for the tyrannical Dolhr Empire. Thanks to the efforts of Altea's Princess Elice, her brother Marth escaped with his tactician Malledus and a small retinue of nights. After two years in exile on the island of Talys, Marth embarked on a campaign to resist Dolhr, ultimately liberating the nation of Aurelius from Dolhr ally Macedon. Upon securing Aurelius, Marth met with its Prince Hardin and Princess Nyna of the Holy Kingdom of Archanea. Together, the three united their armies into the Archanean League, Marth serving as its commander. After liberating the Holy Kingdom, the League moved to liberate Marth's homeland. On the way to Altea castle, Marth stopped in Arran's village. The former knight captain met with Marth and, recognizing his valor, offered his services. However, in response Samson's village angrily closed its doors to the League, to Arran's disappointment.

Arran helped the League storm Altea castle and slay its occupying leader, the cruel Manakete Morzas. From there, the League journeyed to the Fane of Ramon to recover the powerful Lightsphere and Starsphere, which could create a weapon powerful enough to slay Dolhr's Dark Pontifex Gharnef. After securing both Spheres, the League stormed both Macedon and fellow Dolhr ally Grust, Arran assisting with the defeat of Macedon's leader Michalis and the Grustian General Camus. The White Sage Gotoh used the Spheres to create the Starlight tone, which could pierce the otherwise impenetrable shield generated by Gharnef's Imhullhu tome. Gotoh teleported the League to Gharnef's home, the city of Thabes; Arran was among those who engaged the Dark Pontifex's forces while Gharnef himself was finally slain. Finally, Arran was present when the League stormed Dolhr itself, where Marth ended the War of Shadows by killing it's leader, the Earth Dragon Medeus. In the war's aftermath, Marth appointed Arran as Altea's new captain of the knights.

Sadly, shortly into Arran's new role, he contracted a terminal illness. While Arran's disease greatly hampered his combat abilities, he nonetheless devoted himself to obeying Marth's commands with the time he had left. One year after the War of Shadows, Marth chose Arran to accompany him on a mission to Grust at the behest of his good friend Hardin. Having married Princess Nyna of the Holy Kingdom of Archanea and restructuring the devastated nation into the mighty Holy Empire of Archanea, Hardin was experiencing a rebellion in the Archanean occupied nation and requested that Marth suppress it. Unbeknownst to Marth, Jagen, Arran, and the other knights he brought with him, Hardin's true plan was to distract Marth and his strongest soldiers, leaving Altea defenseless for a surprise assault. All Hardin needed was a pretext to declare war, which was given to him after Marth became disgusted with Grust's occupying leader, General Lang, and defied his orders. Altea quickly fell to Archanea, though Marth's sister Princess Elice bought enough time for a few members of Marth's retinue to escape.

Deciding to liberate Grust from Lang's tyranny, Marth, Arran, and the rest of Marth's army searched for the mercenary Ogma, who was protecting Grust's true heirs, Yubello and Yumina, from Lang. They found the three under attack by bandits, and helped fight off the assailants. After successfully rescuing Ogma and the royal twins, Marth's army marched on to Lang's headquarters, Osten Keep. Arran provided what help he could as Marth finally defeated Lang and found Bishop Wendell imprisoned in the keep's dungeons. The old bishop warned Marth that the world risked falling to ruin thanks to the shattering of the Starsphere, and advised him to collect the shards in Chasmir's Fane of Raman; unfortunately, the temple was ransacked by bandits. After routing the thieves, Marth's army attempted to return to Archanea via the Chasmir Bridge, but were were confronted by Hardin's army, who were determined to punish all dissidents. All attacks on Hardin's person were repelled by a dark magical shield, forcing Marth, Arran, and the vanguard to flee to the ocean while the rearguard distracted Hardin's men. The vanguard took a boat to the desert city of Khadein in the hopes that they could find a spell to penetrate Hardin's shield; at the city they also reunited with the rearguard. At Khadein's school of magic, Marth was contacted by the White Sage Gotoh, who explained that Hardin's dark shield and moral corruption were insitgated by the powerful Darksphere. Gotoh had the Lightsphere, which would cancel the Darksphere's magic, but Marth would need to reach him at the Ice Dragon Temple. Arran helped gather Starsphere shards as Marth's army journeyed through Anri's Way. When Marth's group reached it's destination, Gotoh bequeathed the Lightsphere to Marth, reforged the Starsphere, and teleported everyone back to Altea.

After liberating Altea, Marth learned from Gotoh that Gharnef, had returned and planned on using four clerics to resurrect Medeus. Arran accompanied Marth to Archanea to prevent Nyna's abduction, only to learn that Hardin personally delivered her to the Dark Pontifex. After a brutal campaign, the Lightsphere's magic pierced the Darksphere's shield, mortally wounding Hardin but restoring his senses. With his last breath, Hardin regretted his actions and begged Marth to save Nyna. Arran accompanied him to The Dragon's Table, where a resurrected Medeus held the four brainwashed clerics, intending to sacrifice them should he be slain again. However, each maiden was released from their trance by their loved ones, allowing Marth to kill Medeus once again, ending the War of Heroes. All through the war, Arran hoped to fall in battle, as he would at least die upholding a worthy cause, but he ultimately succumbed to its disease shortly after Marth's coronation as the First King of the Archanean Alliance.

Arran's portrait in Fire Emblem: Shadow Dragon and the Blade of Light.

Arran's portrait in Fire Emblem: Mystery of the Emblem.

Arran's portrait in Fire Emblem: New Mystery of the Emblem. 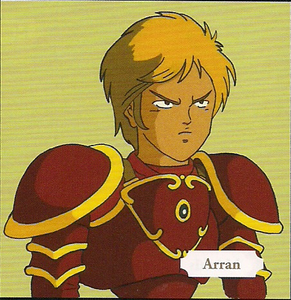 Arran's artwork from Fire Emblem: Shadow Dragon and the Blade of Light. 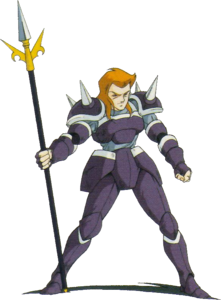 Arran's artwork from Fire Emblem: Mystery of the Emblem.

Artwork of Arran for a Fire Emblem: Trading Card Game card.
Add a photo to this gallery

Retrieved from "https://hero.fandom.com/wiki/Arran?oldid=2130184"
Community content is available under CC-BY-SA unless otherwise noted.