Save her mother from Haru

Adventurer
Arrietty Clock is a protagonist of The Borrowers, a children's fantasy novel by Mary Norton. Along with other characters, she has also appeared in several adaptations, including the 1997 live-action film The Borrowers, and the 2010 anime film Arrietty (also known as Arrietty the Borrower and The Secret World Of Arrietty).

In the film, Arrietty is one of the little people known as a Borrower. They take things they need from humans and live underground in quiet places where they won't be found. They take common things like tissue paper and sugar. According to the rules of Borrowers, if you are seen by a human you must leave the next day to go find a new home.

They think that all humans are the same and they all just want to kill borrowers. Shaun, another main character in the film, didn't think so. He was somewhat fascinated by how they lived and did anything he could to help them. Shaun was a human who, at first, Arrietty and her family thought was going to try and kill them.

However, the entire time, it was just him being nice and aiding them. The old lady living in the house named Hara was the one trying to rid of them. When Arrietty found her mother locked in a jar and saved her, they were to move the next day. A few days later, he found them living in a house down the road from his, where nobody would plan on hurting them. 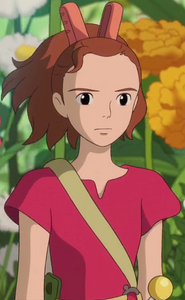 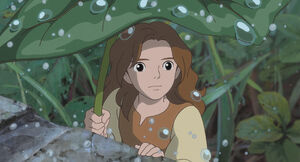