Member of the Team

Get Revenge on Lex Luthor (abandoned)

No information
Arsenal (real name Roy Harper) was the original Speedy, and the former sidekick of Green Arrow. Shortly after becoming Green Arrow's partner, he was abducted by Lex Luthor and the Light, where he was cloned for the purpose of infiltrating the Justice League. He remained cryogenically frozen for eight years, before he was found in early 2016, by Red Arrow, and his wife, Cheshire.

As the genetic template for Red Arrow, Roy exactly resembles his physical clone. He has auburn hair and blue eyes, and is shorter and much less muscular than Red Arrow, given that he was fifteen at the time of his replacement by the clone at his (then) current biological age. While under the guise of Speedy, he donned the same outfit that the clone wore before assuming the position of Red Arrow: a yellow sixteenth century-style hat complete with a red feather, yellow gloves, boots, belt and a red suit. Currently, he is missing a portion of his right arm from below the elbow.

Since dubbing himself Arsenal and joining the Team, Roy sports a buzz cut and an outfit similar to his clone counterpart. He has the mechanical arm replacing the part of his arm he originally lost.

Above average human conditioning: Having undergone an evidently vigorous and intensive training regimen, Arsenal has demonstrated impressive physical feats for a human of his age and size. Even with one arm amputated he still has shown to be very incredible in combat. 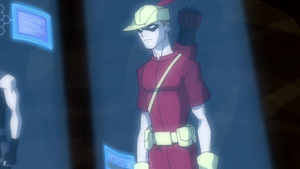 An image of Roy Harper as Speedy, prior to being captured and cloned by Cadmus. 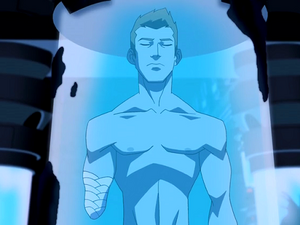 Roy frozen in a Cadmus pod. 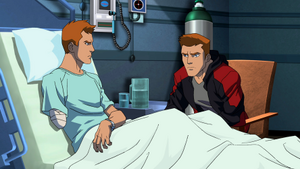 Roy comes to terms with the fact that a clone has been living his life for eight years. 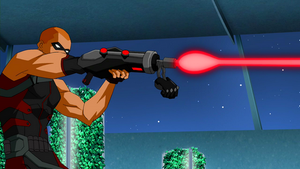 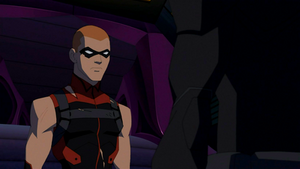 Arsenal is off the Team. 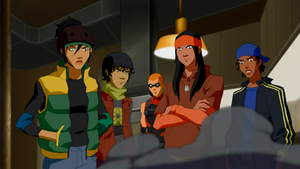 The group severs their ties with Lex Luthor.
Community content is available under CC-BY-SA unless otherwise noted.
Advertisement