Travelling in the virtual world

To escape from IOI (all succeeded)

Art3mis is one of the deuteragonists (alongside Aech, Daito and Sho) in Ready Player One. She was a famous gunter and a member of the High Five. and was first mentioned in Chapter 0002. She is the writer of "Arty's Missives," a blog dedicated to her search of Halliday's egg. Wade/Parzival describes her blog as a collection essays and Almanac interpretations, written in an endearing and intelligent voice. He then admits to having a crush on her, which is frequently addressed throughout the book and proves to complicate their competition. She is married to Wade Watts in the end of Ready Player Two and she is revealed to be pregnant with their baby girl, Kira.

She was portrayed by Olivia Cooke.

Art3mis is intelligent, brave, kind, spunky, independent, selfless, funny, and bold. She is extremely knowledgeable of "gunter" culture. Art3mis is fiercely protective of her freedom and doesn't like to rely on anyone else — especially when it comes to gunting. Furthermore, Art3mis doesn't wear her heart on her sleeve; while Wade confesses his undying love for her, she remains hesitant and cautious, believing online romance to be impossible. Her refusal to return that four-letter word to Wade implies that she's motivated by her goals as a gunter as opposed to those as a love-hungry teenager.

She may succumb to her feelings after the final battle, but it's important to note that she refused to meet with Wade beforehand. This decision indicates her values, as if to say, "let's get the job done first."

In the book, Wade describes Art3mis' avatar as raven-haired and beautiful. She has a pretty face: hazel eyes, a pointy chin, rounded cheekbones, and a perpetual smirk. He also adds that her features look realistic, in comparison to the other avatars, as if her actual face had been scanned into OASIS as a skin. He has also referred to her avatar's body as "unusual."

In the film, Art3mis's avatar hair is pink, instead of black.

After finding her file in the IOI (Innovative Online Industries) database, Wade discovers that Art3mis looks identical to her OASIS avatar with the exception of a birthmark, a port-wine stain on the left side of her face which she attempts to cover with her hair.

Toward the end of the novel, it is revealed that her former address is 2206 Greenleaf Lane, Vancouver, British Columbia. Her former house is also described as small and suburban.

Art3mis first meets Wade in the Tomb of Horrors after he beats the lich-king Acererak at a game of Joust and wins the Copper Key. Art3mis and Wade strike up a conversation which unfortunately results in Art3mis finding out about Wade's win. This is a shock especially since Wade lied and told her that he lost at Joust. She begins to ramble about how for long she's had the tomb to herself. She locks Wade in the tomb to slow down his escape. While waiting for the server to reset, they discuss what they would do if they won the contest. The server resets, and Wade departs.

Wade and Art3mis start talking and socializing with each other, eventually going out on dates. However when Wade confesses his love for her at Ogden Morrow's 72nd birthday party at the Distracted Globe, she dumps him so they can stop spending so much time together and buckle down for the quest. Just then, the Sixers attack and the two barely survive until Og intervenes and destroys the Sixers. After that, Art3mis breaks off all contact with Wade. She later finds the Jade Key.

Wade later finds out more about Art3mis after he hacks IOI and finds files on all of his friends in the "threat assessments" folder.

Wade meets Art3mis, Aech and Shoto in the basement (Daito isn't there because IOI made a successful attempt on his life). There he tells them about how they are going to destroy the Sixer's shield on the 3rd Gate. Og takes them tp his house in Oregon where they execute the plan.

Gunters across the OASIS rally on Chthonia. Art3mis, Aech, Wade and Shoto find their way to the 3rd Gate but before they can open it, the Sixers activate the Cataclyst, which kills off every gunter across the OASIS including Aech, Art3mis and Shoto. But Wade survives as he has gained and extra life. Art3mis, Aech and Shoto help him overcome the challenges and he wins the contest.

Wade and Art3mis meet in real-life where Art3mis apologizes for breaking up with him and they kiss.

Art3mis meets Wade after he saved her from getting destroyed by King Kong. He takes her to Aech's garage where while her bike is getting fixed, they strike up a conversation. wade obtains the Copper Key but does not tell her how.

Art3mis and Wade supposedly crack the Jade Key riddle and visit the Distracted Globe to find it. However, their lead was false but they had fun dancing there. Wade confesses his love for her but she does not dump him. However, he reveals his name, allowing the Sixers to quickly find and attack the two of them. The battle is won and they escape. Art3mis tells Wade the story of how her daddy had died at an IOI Loyalty Centre. She takes him in after the Sixers almost kill him.

They crack the Jade Key riddle and with Aech, Daito and Shoto accompanying them, they travel to the Overlook Hotel and obtain the Jade Key. Art3mis is captured by IOI and put in a loyalty center and with the help of her friends, she hacks IOI and brings down the shield around the last challenge. Art3mis joins the ensuing battle but Wade kills her avatar, allowing her to escape IOI.

Wade finds the last key and wins the contest. Sorrento attempts to kill him, but he and F'Nale Zandor are arrested. Art3mis and her friends take control of GSS and sign Ogden Morrow up for a non-exclusive consultancy, paying a quarter per his demand. They close down the IOI Loyalty Centers and shut down the OASIS on Tuesdays and Thursdays to make sure that people spend more time in the real world. She is later seen kissing with Wade in an apartment at the end of the movie. 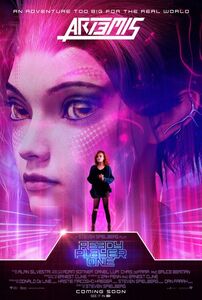 Art3mis/Samantha Cook on a promotional poster.

Art3mis, Parzival & Aech in a promotional poster paying homage to the Beetlejuice poster. 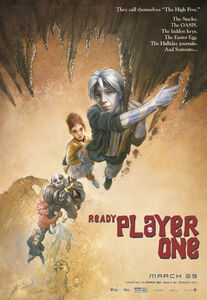 Art3mis and the rest of the High Five in a promotional poster parodying the poster of The Goonies.

Art3mis, Samantha's avatar in the Oasis.

Parzival and Art3mis at the Distracted Globe.

Art3mis & Parzival share a romantic dance at the Distracted Globe.

Art3mis rejects Parzival's love for her, believing he would be disappointed if they met in the real world.

Samantha and Wade being in love at Wade's apartment.