Member of the Olympians
Leader of the Hunters of Artemis


Typhon
Manticore
The Titans
The Gigantes

Artemis is one of the twelve major gods in the Percy Jackson and Heroes of Olympus series. She is Goddess of the hunt, the moon, and chastity. She leads a group of huntress that go around hunting monsters. In the Titan's Curse she was captured by Atlas, and forced to hold his punishment. She is the twin sister of Apollo.

In the Lightning Thief film adaptation, she was portrayed by Ona Grauer.

Artemis is the daughter of the Olympian Zeus, the king of the gods and the Titaness Leto. Upon Leto's pregnancy, Hera became infuriated for Zeus's adultery and cursed Leto to wander the Earth without finding a place with roots to give birth. Leto was eventually given sanctuary on the floating island of Delos, as the nature spirits welcomed her. The goddesses begged Hera to allow her daughter Eileithyia, the goddess of childbirth, to come to Leto.

Leto gave birth to Artemis on the seventh day of the seventh month, and immediately grew up to the size of a six-year-old girl. Artemis aided her mother in delivering her twin brother, Apollo, and seeing how long it took days and nights for Apollo to give birth, Artemis swore to be a virgin. This event also influenced Artemis to become a protector and nurturer of the young, and she didn't like men after that.

Artemis later asked her aunt Hestia to take her to Mount Olympus so she could meet Zeus, and upon meeting him, he swore on the River Styx to grant his daughter anything as a birthday present. Artemis requested to be an eternal maiden, the goddess of the wilderness, and wanted a band of eighty maiden followers to be her hunters. The Elder Cyclopes forged Artemis' silver bow and arrows, while Pan provided her with hunting dogs.

Artemis and her hunters help Percy Jackson friends fight against a Manticore that appears as a teacher named Dr. Thorn. Artemis is captured by Atlas whilst hunting the Ophiotaurus and looking for Annabeth Chase who was taken by the Manticore. Atlas used Artemis and Annabeth to bring Percy Jackson and his friends to him.

The titan had Annabeth take his place to hold up the sky, and Artemis switched places with her, not wanting to see the young girl die. During the fight, Zoe Nightshade dies protecting Artemis. The goddess forces the titan back to holding up the sky to honor Zoe Nightshade's death, and Artemis turns her into a constellation. 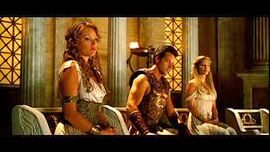 Artemis in The Lightning Thief movie.
Add a photo to this gallery

Retrieved from "https://hero.fandom.com/wiki/Artemis_(Camp_Half-Blood)?oldid=2310106"
Community content is available under CC-BY-SA unless otherwise noted.