Artemis is character from the 2009 DC Super Hero Movie Wonder Woman, based from his comic book persona, is an Amazon that specializes in bows and arrows as well as sword play. She is very fierce in battle. Undoubtedly one of the strongest (if not the strongest) of the Amazon warriors, Artemis is responsible for the training of many of Amazon's finest warriors. Artemis has gone on to see friends die on the battlefield, which has led her to be a bit more closed off and steadfast than many of the other Amazon's. After witnessing the strength of Alexa, one of of the "weaker" of the warriors in terms of muscular strength, and her intense knowledge of the world around her, Artemis made a resolution to read more of the books that her friend once buried her nose in so often.

She was voiced by Rosario Dawson

Artemis was a prominent character in the 2009 Wonder Woman direct-to-video animated feature, which re-told Wonder Woman's origin story. Artemis was voiced by 'Rent' actress Rosario Dawson. There were some differences between the original comic book Artemis and this animated version. The Bana Amazon tribe was never mentioned in the film and Artemis was instead an Amazon of Themyscira. She was older than her comic book counterpart and had fought alongside Queen Hippolyta in many battles and wars throughout the ages, establishing herself as one of Themyscira's greatest warriors, perhaps even it's greatest.

As great as her prowess was, there came a time when Artemis' fighting skills were surpassed by Hippolyta's daughter, Princess Diana. Diana proved she was the mightiest and most skilled amazon when she won the contest to represent the Amazon people in "Man's world" and became Wonder Woman. There was a difference in Artemis' role in comics and this animated feature. Rather than compete in the contest like in the comics, in this feature Artemis was assigned to oversee it.

The story of Artemis also forms one of the sub-plots of the movie as in this version she has a sister that is closer to her than the other Amazons. However, Artemis' sister is nearly her polar opposite, as she is a scholar, a relatively poor combatant, almost cowardly and more inclined to read poetry than train. She is also indirectly responsible for the maiming of one of her sisters, who was blinded on one eye, and remained bitter ever since. Artemis lost her sister when the maimed Amazon betrayed them all when she released Ares after taking her revenge. During the final battle with Ares and his minions Artemis comes face to face with the spirit of her deceased sister, remaking it was a rotten time for her to get talented with a blade. Despite the confrontation, the movie ends with Artemis attempting to read some of her sisters books after they return home.

This version of Artemis was depicted wearing an outfit that closely resembled her black and brown midriff-baring alternate costume from comic book continuity. She also retained her distinctive long flowing-topknot hairstyle and some of her Themiscirian adornments including her gold upper arm bands, her distinctive gold neck bands and her loose, sheer pants-like garment. 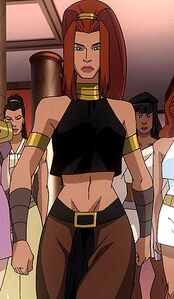 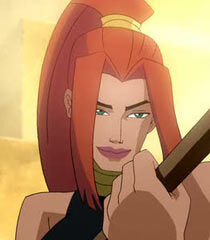