Artemis Crock is a heroine of DC Comics. The third Tigress is Artemis Crock, the daughter of the second Tigress, and is a member of the Injustice Society; of the three characters, she has been most substantially adapted into other media, appearing as a main character and a heroine in the 2011 cartoon series, Young Justice.

During her adolescent years, Artemis's personality was a product of her unusual upbringing. In the kill-or-be-killed culture in which her parents raised her, Artemis had to constantly fight for her life, resulting in her considerably aggressive nature and willingness to solve problems with force. She was also protective of her secrets, and constantly lied to her friends out of fear of being discovered as the child of villains.

For the most part, Artemis is a very passionate and opinionated girl. Always ready with a witty and biting remark, she is intent on proving herself to anyone who questions her. Artemis conceals her defensive nature with an aggressive attitude, exhibiting a wild temperament that is apparent when people argue or belittle her. She readily involves herself in confrontations with little to no hesitance.

Artemis is a half-Caucasian and half-Vietnamese, teenage girl of average height. She has olive-toned skin with long thick blonde hair and dark gray eyes. Artemis is slender in stature, yet has an athletic build. At the age of fifteen, Artemis had hair down to her waist, which she often kept tied back in a ponytail, both in uniform and civilian garb.

Artemis's uniform was a midriff-baring costume that highlighted her build. It was colored in various shades of green and consisted of a mask extending from the hairline to the cheekbones, a sleeveless top with a stylized arrow tip on the front, fingerless gloves, pants with black knee pads, and black combat boots. She had a black utility belt and pouch strapped on her left leg that were likely filled with assorted tools. Artemis carried a quiver along her back with a bow and a multitude of multi-purpose arrows. Her costume was apparently less than six months old as of September 4. Sometime between October 1 and October 10, the costume was outfitted with stealth-tech that could be activated by pressing the arrow symbol on her top, which turned the various shades of green in her uniform into darker shades of gray.

By 2016, Artemis has grown noticeably taller, with her hair only extending to her upper back. After receiving Zatanna 's Glamour Charm from Nightwing, Artemis takes the appearance of an Asian girl, with slightly different facial features than normally; shoulder length jet black hair, almond shaped eyes, paler complexion and a deeper voice.

While operating as Tigress, she wears a predominantly burnt orange and black costume, with a hard orange mask that covers her forehead, nose and cheeks resembling a stylized tiger's face. She also wears a black sheath behind her back which stores her sword and also wears a black belt to store her weapons.

She has been trained by her father, making her an impressive archer and combatant, although she is not quite as polished or as physically strong as Red Arrow. 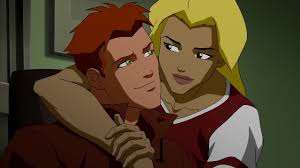 Artemis and her dad Sportsmaster 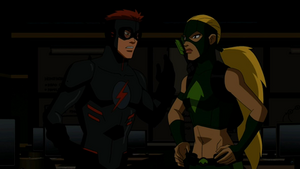 Artemis with her mom 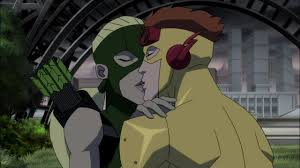 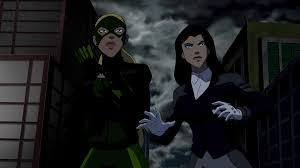 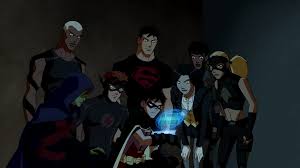 Artemis with The Team 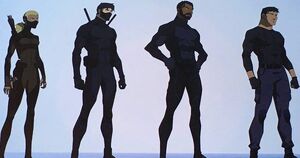 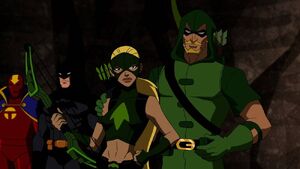 Green Arrow and Artemis
Add a photo to this gallery
Retrieved from "https://hero.fandom.com/wiki/Artemis_Crock?oldid=1691128"
Community content is available under CC-BY-SA unless otherwise noted.