Arthur (Arthur and the Invisibles)

Kid Hero
Arthur (born 1950) is the 10 (later 13) year-old son of Francis and Rosie, the grandson of Archibald and Daisy, the betrothed of Selenia and the main protagonist of the 2006 film Arthur and the Invisibles and its two sequels Arthur and the Revenge of Maltazard and Arthur 3: War of the Two Worlds (in the UK, the second and third films were merged into one film titled Arthur and the Great Adventure).

Arthur and the Invisibles

In the year 1960, Arthur goes missing but his grandmother Daisy finds him reading up on his grandfather Archibald's travels in Africa. Soon, Daisy and he go shopping, with the former getting the latter a surprise birthday cake.

When they get back, Arthur builds his own personal viaducts, claiming they will be "bigger than Grandpa's, better than Caesar's". When he turns the tap on, finding that they work, Daisy calls him to answer the telephone. Finding out it's his parents on the other end, he states his excitement for his creation, hoping they will be home in time to see it. Though, they let him down, saying they won't make it for some time. Luckily, Daisy then brings in his birthday cake, along with presents. He opens his presents, finding a new ball from his dog, Alfred, and a wind-up car from Daisy. After getting upset about his parents not being there for his birthday, Arthur makes an emotional wish, that his grandfather, who has not been seen for years, will be there the following year for his birthday.

That night, Daisy reminisces to Arthur about Archibald's time in Africa, mentioning the Bogo Matassalai, the big bag of rubies given in return, and the Minimoys.

The following day, Ernest Davido visits Daisy about their eviction. When he arrives, he trips over Arthur's brand new ball, causing him to throw it in the water silo, and call Arthur "rat-boy". When he hears of the eviction, Arthur decides to find the rubies. He searches through the yard, as well as through his grandfather's work. After finding a serious of clues, Arthur finds directions on how to get to the Minimoys. After following these detailed instructions, he meets the Bogo Matassalai, who tell him that his heart "is the strongest of weapons". He then peers through Archibald's telescope, and meets prince Betameche. He is then shrunk, transforms into a Minimoy and is taken before the King Minimoy. In this turn of events he not only meets Selenia, the King's daughter, but also pulls a sacred sword out of the ground.(which Selenia failed to do). Arthur then tells the King of his quest to find Archibald's treasure, only to be informed that a corrupt Minimoy named Maltazard, or commonly known as the Evil M, has stolen the treasure. Arthur, Selenia and Betameche set out to take back the treasure. During this time, Arthur and Selenia developed close feelings for one another. They meet a pub owner named Max who gives them directions but they are soon captured anyway. The trio are taken before Maltazard, who throws them in the dungeon. Arthur then discovers Archibald (in Minimoy form) in the dark. The Evil M then reveals his plans to flood the Minimoys village and get his revenge.

Arthur then tells one of Malthazard's servants (who is a Minimoy that was previously captured) to shine the light of the rubies at a certain time. Maltazard gives his hostages 3 minutes to get to the Minimoys village before he floods the tunnels. Arthur, Selenia, Betameche and Archibald avoid this fate by driving Arthur's wind up toy car to the Minimoy village. As they enter, they barricade and seal the doors shut, thus ruining Maltazard's plan. The Minimoys thank Arthur for his brave deeds send him and Archibald back home and to their normal sizes. Arthur then gets his ball and drops it down the pipe, which is illuminating with light from rubies, which results in Maltazard's forces being destroyed. The Evil M even leaves behind his son, Darkos, to die. Arthur then reaches down and takes away the hostage and the treasure. First, he gives the rubies to the developer and then returns Mino back to the Minimoy village. The film ends with Arthur sitting in his room as Selenia watches him. 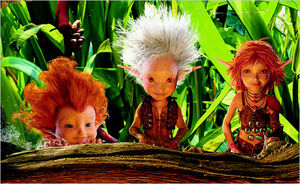 Arthur with Selenia and Betameche.