Arthur is a member of the Mystery Skulls and an excessive coward. His character is heavily based on Shaggy from the American animated television series Scooby-Doo.

Arthur appears to be a more cowardly member of the Mystery Skulls. His reactions to the various events occurring in the mansion are proof of this. Aside from this he seems to be rather friendly and good-hearted. Before Lewis' death he was shown to be jealous of his friends' relationship. Later on he is too terrified to try and set things right.

Arthur and Vivi are part of the same paranormal investigator group. They are portrayed as mutual friends and appear to worry about each other's well-being (Vivi tries to defend him when he's cornered by Lewis and Arthur tugs her out of the mansion and shoves her into the van when they are making their escape). Before Lewis' death Arthur seemed to be unhappy with Vivi and Lewis dating. Because of this most people assume that he has/had feelings for her.

Mystery is another member of the Mystery Skulls (as well as their mascot). Him and Arthur are, presumably, mutual friends. Mystery was the one who saved Arthur from being entirely consumed by whatever was lurking in the cavern and possessing him the night Lewis died. In order to save him, the dog tore off one of Arthur's arms which is replaced by a robotic arm in the present.

Lewis was a member of the Mystery Skulls before he died. Back then him and Arthur were team members and, most likely, friends. As Arthur was being possessed he/the creature controlling him killed Lewis. When they face each other in the mansion Lewis is furious with him and tries to get revenge, possibly assuming that Arthur was in control of his own body when he pushed him to his death in the past. Arthur presumably remembers him since there has been no indication of him losing his memory like Vivi, but the events in Freaking Out and Hellbent show that Arthur lost his memory about that Lewis died and assumed he went missing instead.

Lance is Arthur's uncle. Arthur works at his repair shop and is thus not only his nephew, but also his employee. They share their interest in mechanics, although Arthur's tinkering goes beyond cars and the likes into robotics. Lance cares about his nephew.

Galahad is Arthur's pet hamster. Being the loving pet owner he is, Arthur built Galahad a set of wheels so the animal could move around despite being half-paralyzed. The pet doubles as an assistant to the mechanic. 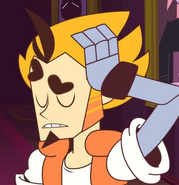 Arthur while driving
Add a photo to this gallery
Retrieved from "https://hero.fandom.com/wiki/Arthur_(Mystery_Skulls)?oldid=1588444"
Community content is available under CC-BY-SA unless otherwise noted.