Heroes Wiki
Register
Don't have an account?
Sign In
Advertisement
in: Articles under construction, Mature, Male,
and 85 more
English

Survive alongside Dutch and his gang and live a normal life (failed).
Rescue Jack Marston from the Braithwaites and Angelo Bronte.
Escape Guarma.
Help John and his family get to safety and escape Dutch and the Pinkertons.
Rescue Abigail Marston and Sadie Adler from Agent Milton and the Pinkertons.
Kill Andrew Milton for killing both Hosea and Lenny too (all succeeded).
Steal Dutch Van der Linde's money (Low Honor route; failed).
Kill Micah Bell as revenge for betraying the gang to the Pinkertons (posthumously succeeded).
Make sure Thomas Downes pays the debt he owes Leopold Strauss (succeeded, but backfired).
Run away with Mary Linton (abandoned).

He is a notorious outlaw who serves as the lead enforcer of the Van der Linde gang, and assists his mentor Dutch van der Linde in trying to live the dream of living outside of the law, who begins to have doubts about his loyalty to the gang's leader. Throughout the game, he attempts to either achieve his redemption or become even more ruthless and cold-blooded in his life.

He was portrayed by Roger Clark in motion capture.

Arthur Morgan was born in 1863 to Lyle and Beatrice Morgan, the former being a petty criminal, and the latter dying when he was young. Arthur described his father as being a "no good bastard", and witnessed his death. Despite not liking his father, or knowing his mother, he keeps their photos, sensing some fondness.

At a young age, he was picked up and adopted by Dutch van der Linde and Hosea Matthews, and become one of the first members of the Van der Linde Gang. At some point in his youth, Arthur met and fell in love with Mary Gills, but their relationship ended due to Arthur's criminal life, and her family's disapproval.

Later on, he met and slept with a young waitress named Eliza, who would father his son, Isaac. Arthur would give them support, and sometimes visit monthly and stay for a few days before returning to the gang. One day, Arthur went to their home and saw two graves and crosses outside, and knew they were dead. He later learned that that the two were killed by robbers, who broke into their home, and killed them for ten dollars.

The incident hardened Arthur, and he never knew how to deal with the pain for years.

Arthur and the Van Der Linde gang flee away into the snowy mountains of Ambarino in order to escape the law after a heist-turned-massacre. One member, Davey Callander, dies right before they can reach the abandoned settlement of Colter. They encounter a widow named Sadie Adler, whose husband Jake was murdered by the O'Driscolls, a gang who serves as the Van Der Linde gang's rivals. They take her in and shelter her, before robbing a train owned by Leviticus Cornwall, a railroad magnate. They leave and head to the site of Horseshoe Overlook in Valentine, beginning Chapter 2.

Arthur is a cold, brooding outlaw who often resorts to violence and has very few moral qualms about killing. At his worst, Arthur could be completely emotionless and unemphatic to the people he hurts. Despite being capable of committing such violence, Arthur does have a playful side to his personality that comes out around those he is friendly with. He isn't above joking or employing sarcasm amongst his friends. Notably, Arthur was kind and polite to John Marston's son, Jack. Having a gentle demeanor around the young boy in contrast to his threatening persona.

Despite his ability to commit great acts of violence, Arthur has his own moral code and doesn't believe in what he deems as unnecessary killing. Especially if it endangers himself or those he cares about. He was also raised by Dutch to believe that revenge is a fruitless endeavor. It seems Arthur strictly believes that violence should be cold, necessary, and without feeling, never out of personal enjoyment or without reason.

In his own terms, Arthur is aware that he is a "bad man" and clearly understands that his bad behavior is morally wrong. However, he justifies his own actions as being different from most criminals. As the Van der Linde gang carries a philosophy that Arthur genuinely believed could help people. But he soon realized that this philosophy to be a ruse or an "excuse" as John Marston would later put it.

Arthur’s Honor can affect his overall personality as a whole; with high honor, Arthur can be seen as a selfless person who will think of others and more practically about situations, such as when he realized that the gang was fighting for an idea that didn't work anymore, and how he realized that the women and Jack would surely die if he didn’t help them leave the gang. With low honor, Arthur can be seen as a selfish person thinking of himself solely, such as caring about his own survival, even prioritizing revenge on Micah and getting the gang's money stash over helping John and his family.

Unlike most of the time period, Arthur does not hold sexist or racist views, even stating he hates everyone equally. 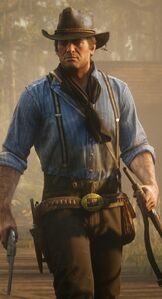 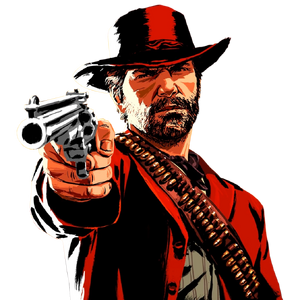 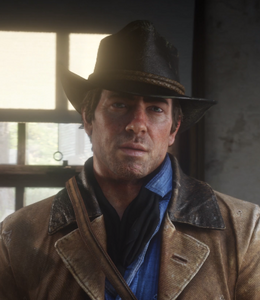 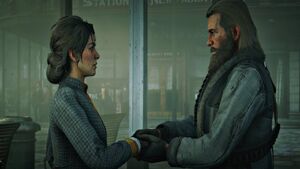 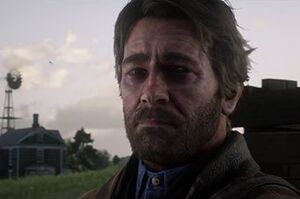 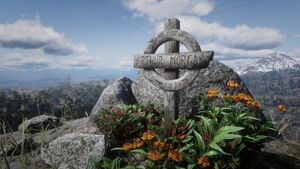