The Sword in the Stone

Hanging out with Archimedes and Merlin.

Become a competent ruler of England upon pulling the sword.

Arthur Pendragon (also known as Wart) is a figure from British folklore who was featured as the main protagonist of Disney's 18th full-length animated feature film, The Sword in the Stone.

In the film, Arthur is an orphan boy who becomes King of England thanks to his ability to pull a legendary sword from an anvil, making for a highly iconic moment.

Arthur was known as a 12-year-old orphan with blond hair and is very scrawny and awkward, but also friendly and polite. He has a rich imagination and dreams of becoming a knight and having adventures. However, as he is an orphan, he knows that the most he can hope for is to become a squire to his boorish foster brother, Sir Kay.

The Knight Sir Ector found Arthur when he was a baby and took him in. Although Ector cares for the boy to an extent, but he still tends to favor his son, Kay, and thus raises Arthur much more strictly, and Kay is a constant tormentor to his adopted brother. Almost everyone refers to him as Wart rather than his birth name, Arthur.

In fact, his real name is rarely mentioned throughout the film (And his last name, Pendragon, not at all), once by Wart himself, and later when he is revealed as the rightful King of England.

The Sword in the Stone

Wart watched Kay hunting when he was in the woods, but he accidentally injured Kay. Wart began looking for the arrow that Kay lost and eventually appeared in the home of Merlin (the protagonist of the movie), a powerful wizard, and became friends with him. While enjoying tea with Merlin, Merlin tells Wart about the value of education and appoints himself as a mentor to Wart.

Wart returned to Sir Ector's castle and Merlin and was sent to the kitchen as a punishment for the fear of Sir Ector. Sir Pelinore is a friend of Sir Ector, who came here with a tournament news and won the British crown as a prize. Sir Ector decided that Kay could participate in the knighted in time. Ector also appointed Wart as Kay's future homesickness, which will be held in London. The next day, I was accompanied by Merlin in the first class. Merlin turned them all into fish. At first, everything went smoothly. He was quickly chased by a big shuttle and initially managed to surpass the pike. Fortunately, he was saved by Merlin's loyal owl Archimedes. This adventure taught the value of the brain to the muscles. When Wart turned back, he rushed to the kitchen, Ector gave him six shortcomings; 3 was late, 3 after telling the true story of his lesson.

Later on, due to his punishment, he was forced to clean the entire kitchen. Merlin washed the dishes for himself and took Wart to another class. This time, the course was about gravitation and (unexpected distortion) the relationship between men and women; in this lesson, Wart became a squirrel and met a female squirrel who wanted him as a partner. When he tried to escape the passionate squirrel, he was in danger of being eaten by the wolf. However, because of the female squirrel, he was saved, but he later became a boy again. Although he tried to explain, the female squirrel was heartbroken. After returning to the castle, Sir Ector began to blame Merlin for what he considered to be the kitchen black magic. Wart tried to defend Merlin, but Ector left more shortcomings on the boy and eventually punish him by revoking his chances of traveling to London and making an invisible boy, Hobbs, Kay's nostalgic at Wart's position. Merlin thinks that Wart is disappointed and apologizes, but he points out that Wart can still create something by educating himself.

Merlin needed time to explain the different concepts about how the world works, but it became so confused that Archimedes took over the education of the ape. After discovering that Wart is illiterate, Archimedes taught Wart reading and writing. During the break, Merlin needed time to show the model airplane. Although the demo didn't work, Wart was still impressed anyway and linked his flying dreams to Merlin. When Wart spoke, Merlin turned him into a sparrow. He then flew with Archimedes. The flight was smooth at first, because the cockroach proved to be innate in flight, but during the flight, the cockroach was chased by the eagle, and when it fled, it finally fell into the chimney of Madam Mim, the enemy of Merlin. Although Madam Mim tried to show Wart her magic, it was selfish, better than Merlin, and Wart disagreed, so Madam Mim became a cat and tried to eat it. Merlin's students were saved with the intervention of Merlin and Wart, and later observed a wizard match between the two wizards. Therefore, Wart learned the value of knowledge and wisdom, because Merlin won by surpassing Mim. At Christmas time, Wart was reinstated as Kay's homesickness (because Hobbs had mumps). I am very happy because he thinks this is the only chance for him to advance. Merlin was angry that Wart still liked war games rather than education, so the wizards transferred themselves (very unintentionally) to Bermuda in the 20th century and lost control.

On New Year's Day, he joined the tournament with Sir Ector and the newly knighted Kay. When Wart realized that he had forgotten Kay's sword in the hotel, everything went smoothly. In order to find a substitute, Wart pull a magic sword from the stone in an ancient cemetery. When the sword is brought, it is immediately considered to be the legendary sword in the stone, which should be pulled by the legitimate British king. All the knights in the game forced Wart to repeat the process, but before he could do so, Kay, Sir Ector and some other knights tried to pull it out, on the grounds that anyone could pull it a second time. It is confirmed that it is false). Pelinore and a knight named Sir Bart blocked the other knights and allowed the sword to be pulled. He succeeded in doing it, and everyone yelled at him as the King of New England.

Sir Ector took the opportunity to ask Wart for forgiveness, which Wart thought was unnecessary. The crowd asked for the boy's name, and Sir Ector almost called the boy, then corrected himself and called the boy Arthur for the first time. Time passes and Wart, now crowned King Arthur, feels unprepared for the responsibility of ruling a country. With the assistance of Archimedes, he attempts to run away, but every exit is blocked by cheering crowds. Merlin then unexpectedly returns from Bermuda and is pleased to see that Wart is now King Arthur and relates how famous the boy will become in the future.

King Arthur appeared about twice in House of Mouse. In "Rent Day", where Mickey asks him to loan him money, and Merlin (next to Arthur) offers him money to get Arthur a sword. And in "Ask Von Drake" The Ludwig Von Drake Song shows a shot where King Arthur, Merlin, Sir Kay, and Madam Mim are trying to pull the sword out of the stone.

Return to the Isle of the Lost: A Descendants Novel

Arthur is mentioned in the novel. He has a son named Artie. He also dislikes technology, keeping Camelot Heights in the Dark Ages; though it's presumed that Arthur elements when it comes to medical care. King Ben is mildly annoyed with Arthur's choice as Camelot smells terrible from the lack of modern cleaning and bathing supplies. 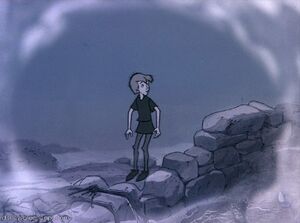 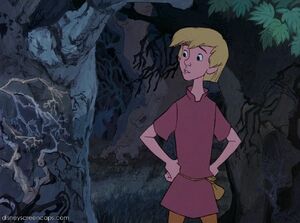 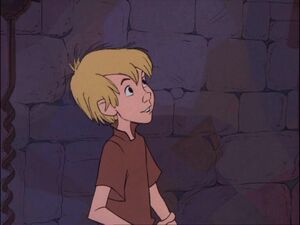 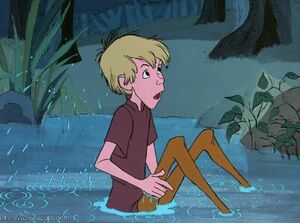 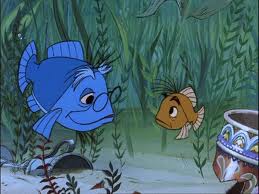 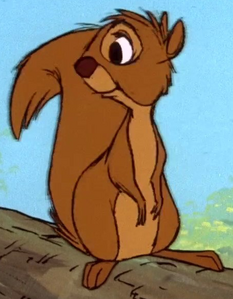 Wart as the squirrel. 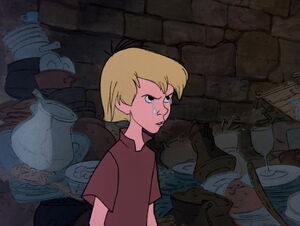 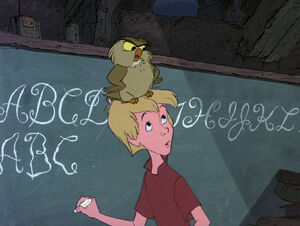 Learning the alphabet from Archimedes. 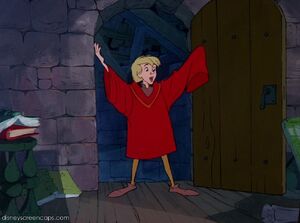 Arthur as a Squire. 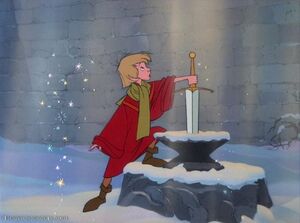 Arthur pulling out the Sword for a second time. 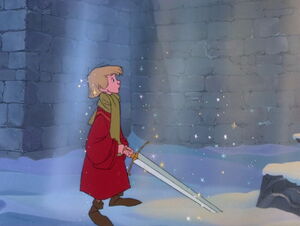 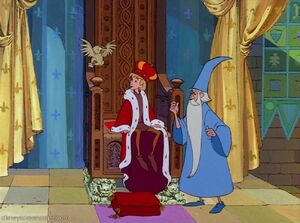 Arthur with his advisors.
Add a photo to this gallery