Detective, Observer for the Survival Game

Hanging out with Yuki

Identify the third body in Yuno's house (succeeded), Convince Yuki that Yuno was just using him to win the Survival Game and take him away from her (failed)

Aru Akise is the secondary male protagonist of the anime/manga series Mirai Nikki. He is very intelligent and dreams to be a world famous detective when he gets older. Investigating the connections between Yukiteru Amano and the diary owners, Akise becomes a close ally to Yuki, but an enemy and rival to Yuno Gasai. Akise quickly falls in love with Yukiteru, and wishes for him to become the next God.

He is also the main character of the spin-off manga Future Diary: Paradox, where he and Muru Muru replace Yuki and Yuno in the survival game after Muru Muru accidentally kills Yuno Gasai while Yukiteru is injured.

He is voiced by Akira Ishida in the Japanese version of the anime and Todd Haberkorn in the English version, the latter of whom also voices Rowen J. Ilbert and Kinji Tohyama.

Akise is a very clever, boy, a bit eccentric with a cool and calm personality. Known for being very handsome, he is a boy who enjoys playing detective, skipping school and searching for clues to solve cases. He is very smart and uses his intelligence to play games with people and gain the upper hand-like with Hinata Hino when he pretended to have a Future Diary. He has proved to be a very agile and quick thinker, always coming up with successful plans.

Despite his smart and analytic nature, Akise has been created by Deus Ex Machina to gather important information about the other players, saying that he has no real soul or life, being just a "tool" in the game. Akise has shown feelings for Yukiteru (as shown when he kissed Yuki on the lips), but Deus also says that was part of his plan. Akise also says at one point that he isn't really interested in boys, but that Yuki is an exception.

For most of the game Akise does not use a Diary; although he is later given an Apprentice Diary: The Detective Diary, which allows him to read the predictions of other Diary Holders as well as their actions. This basically renders any opposing Diary useless, as he will always know the outcome. Despite this incredible advantage which easily makes this the most powerful Future Diary in the series, it does have weaknesses. For example, if one already knows what the predictions on his Diary are, one can instead perform actions that would force Akise himself to change the future instead of trying to change it oneself. Secondly as demonstrated by Yuno, since it reads entries of different diaries, if one has access to multiple copies of a same Diary then it IS possible to confuse The Detective Diary. It is unknown if this method would work with different Diaries given that he could read both The Yukiteru Diary and The Random Diary, unless many more diaries could led to overflow of information - although this is unknown.

For most of the series Akise relies on his great intellect to solve things. As the detective he aspires to be, Akise is quite smart and can deduce things easily with smart bits of information. For example, during the few times that Karyuudo sent his dogs on a killing spree, Akise was capable of tracking him. He also could figure out that Yuki's Random Diary worked based on his perspective, with seemingly no information at all. Aru defending Kamado from YunoBeing a detective, he has strong ties with the police mostly with Masumi Nishijima; this gives him access to resources used by the police presumably information and also the policemen themselves, evidenced how he could figure out Yuki was a common under the multiple incidents with the Diary Holders, as well as have the police guard different places.

Akise proves himself to be an expert in hand to hand combat, being able to overpower Yuno even though she had pinned him down with a knife to his throat. While he is mostly seen without a weapon, when it comes to fighting he does have a preference for bludgeoning weapons like tonfa or a pipe.

Aru Akise is contacted by Muru Muru after she accidentally removed Yuno Gasai before the start of the survival game.

When Akise first appears he is watching Yuno and Yuki from a distance. When Yuki notices that Akise is following him and Yuno, he attempts to tell Yuno only for Akise to appeared to have disappeared when Yuki looked away and then looked back. Akise later reappears in the park when Yuno, Yuki, Mao, and Kosaka are about to be attacked by a pack of wild, murderous dogs. Yuki starts shaking when he sees that Akise was the person following him before. Akise notices Yuki shaking and tells him that he thinks it's cute while gently stroking Yuki's cheek. This weirds Yuki out to the point where he just falls to his knees. In the English dub, right after Yuki falls to his knees, Akise calls him "hot-stuff". He tells Yuki that he can be trusted and that he is his friend.

The Seventh's Battle of Love

With Kamado's help, Akise speaks directly with the dying Deus, asking him if it is possible to truly resurrect people. Deus answers the it is possible to resurrect the body, but the soul can never be brought back, therefore it is impossible to bring the dead back. With this new found knowledge, Akise realizes that Yuno had been lying to Yuki and decides to warn him; however Deus stops him and reveals another truth, that Akise is in fact a creation of Deus to serve as an observer in the game, whose duty was to obtain information. Akise denies that he was just a puppet and claims he has a will of his own, to which Deus challenges him to prove it. Akise says that he investigated both Karyuudo and Yuno out of his own will, but Deus says that Karyuudo was trying to evade the game and that Yuno is the most important person in the game. Deus gives one final chance to Akise, where Akise replies that his love for Yuki is his own, but Deus claims it is fake before banishing him. However Akise manages to turn back after successfully receiving his Detective Diary from Kamado, which Akise uses as evidence of his own free will to Deus. Amused, Deus agrees to let him do whatever he wishes. [1] Akise fights Yuno Akise, is later found by Yuki and Yuno, and Akise says that the Eighth is in a safe place. Yuno asks where is she, and Akise mockingly says that he wants to talk with Yuki and that she should leave. Angered she stabs Akise, but proves futile as he has a protective vest. Yuno tries a stun-gun but Akise uses a rubber glove. Yuki and Yuno are shocked on how it is possible since Yuki's Diary confirms his death, and Akise reveals his Diary to them that renders theirs useless. Yuno urges Yuki to go after Kamado while she fights Akise, and he does so. Akise fights Yuno and wins with the help of his Detective Diary. However, Yuno manages to outsmart his diary by stabbing herself, to which Yuno threatens Akise that if left for dead, Yuki would hate him. Confused and shocked, Akise treats her wounds and leaves to get to Yuki as soon as possible.

Akise uses this time to try to call out to Yuki, but he cannot make contact. He finds too late and much to his horror that Yuno had by this time tricked Yuki into killing his friends and rushes to Yuki desperately. There he finds that Yuki has killed all the others in an attempt to kill Kamado.

During his last attempt to convince Yuki about abandoning Yuno as he believes Yuno will kill him to become god. Yuno arrives wounded and tells Akise to get away from Yuki, but Akise tells Yuno that he won't let Yuno have Yuki and kisses Yuki, provoking Yuno. He fights once more against her ready to destroy her Diary which he does, however and much to his shock, Yuno is still alive and slices his throat. Upon reading the entry on the destroyed Diary, he realizes that what he destroyed was the real Yuno's Diary instead of hers, but given that the real Yuno was never a participant, it is impossible that she would have a Diary. Pondering the rules of the game and the power of the Diaries, he finally discovers Yuno's secret.

Akise, who had discovered Yuno's secret, tries to tell Yuki, but finds himself unable to speak due to his throat injury. He is then decapitated by Yuno while trying to show Yuki his diary's screen, on which he had written his discovery about Yuno.

After the incident in the Second World, Aru Akise works for Deus as an observer for the twelve diary holder. Third World is living in peace without the incident and massacre that happened in Second World. Deus' power is still dying yet, he hasn't found a new God to take his place and even planned out a new game.

Akise, Yuno, Mao, Hinata, Kosaka and Reisuke (being his assistant) were all out for Summer class excursion when Yuno realizes that something is missing from her. Akise reports this to Deus.

After Yuno got passed third world Murmur, she sees Akise standing in the middle blocking her way. Akise starts telling her about her First World's personality and what she did to the Second World. Akise charges with a katana at Yuno, Yuno stops him and falls together on top of him. Yuno took the katana and kept walking until she saw the sphere, where First World Yuno locked Yukiteru (a world created by her for Yukiteru's wishes and desires to happen). From there, she saw the first world Murmur. Murmur starts crying and talks about her old master, First World Yuno, to her and how her memories shouldn't vanish in vain. Yuno accepts her First World memories. 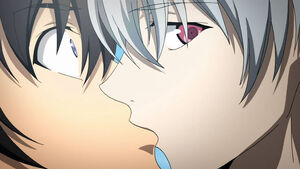 Akise Kissing Yuki
Add a photo to this gallery
Retrieved from "https://hero.fandom.com/wiki/Aru_Akise?oldid=1938103"
Community content is available under CC-BY-SA unless otherwise noted.