Defend the city from MetsubouJinrai.NET and the Magia

Egalitarian Businessman
Aruto Hiden is the current CEO of Hiden Intelligence and titular main protagonist of Kamen Rider Zero-One. He transforms into Kamen Rider Zero-One to defend humanity from the cyberterrorist group MetsubouJinrai.NET and their rogue Magia.

He is portrayed by Fumiya Takahashi.

When Aruto was young his father Soreo died. Soreo was replaced by a HumaGear doppelganger who sacrificed himself to protect Aruto from an explosion caused by the Daybreak Town incident.

As an adult, Aruto aspired to be a comedian but struggled due to not being able to tell funny jokes. After his grandfather died, he wrote in his will that Aruto was to be his successor as CEO of his company, Hiden Intelligence. Though reluctant at first, Aruto accepts the role and becomes Zero-One to defend humanity from MetsubouJinrai.NET and their rogue HumaGears.

After Izu was destroyed by Horobi, Aruto was corrupted by Azu into becoming Kamen Rider Ark-One. After Izu was murdered by Horobi, Aruto fell into despair over his longtime companion's death and was unable to cope. He was then approached by Azu, mimicking Izu, who referred to him as "Ark-sama" and handed him the Ark-One Driver and key to become the next incarnation of the Ark. Aruto thus transformed into Kamen Rider Ark-One and headed towards the battle between the A.I.M.S. Riders and Horobi's army of Magia.

After making a thunderous entrance, Ark-One singlehandedly defeated each of the Riders and wiped out Horobi's army before going to destroy Horobi himself. However, Aruto soon became too strained by Ark-One's power and was forced to cancel his transformation temporarily, revealing his identity as Ark-One to Fuwa, Yua, Jin and Horobi. He then exited the scene, returning to Azu.

Kamen Rider Ark-One later went to MetsubouJinrai.NET's base to search for Horobi, only to be confronted by Kamen Riders Vulcan, Valkyrie and Thouser. When the three refused to step aside, Ark-One easily pushed through them and dodged their attacks. Thouser then attempted to strike Ark-One with his Thousand Jacker, but Ark-One grabbed the blade and canceled Thouser's transformation before crushing his ThousanDriver. Ark-One then sent out a wave that disabled Isamu Fuwa and Yua Yaiba's AI chips, rendering them unable to assume their Kamen Rider forms, before heading into the interior of the base. To his frustration, Ark-One found that Horobi was not there.

After Horobi began assembling another army of Magia for a second attempt at a crusade, Aruto showed up to confront him and transformed again into Ark-One to do battle. After Ark-One destroyed his army, Horobi assumed his Kamen Rider form to do battle against it but was overwhelmed by the immense power of Ark-One. Before Ark-One could perform his finisher on Horobi however, Kamen Rider Jin Burning Falcon suddenly swooped in and took the blow instead, resulting in him being fatally damaged and destroyed. Shook over the fact that he had taken an innocent life, Aruto canceled his transformation.

Aruto later confronted Kamen Rider Horobi Ark Scorpion as Ark-One and willingly allowed Horobi to defeat him as Ark-One, canceling his fate as the second generation of the Ark. 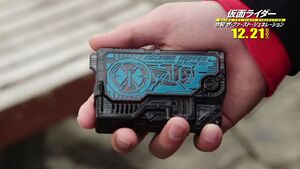 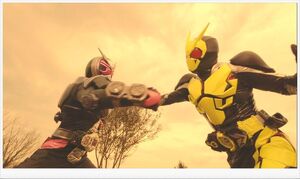