Asagi is a hanyou and a protagonist in the film Inuyasha: Fire on the Mystic Island.

She was voiced by Fumiko Orikasa in the Japanese version and Rebecca Shoichet in the English version.

Asagi has greenish hair pulled back in a ponytail. She wears a light brown dress.

She lived on a magical island, far off the coast of Japan. This island was once a paradise, where humans and benign demons lived together in peace and harmony. For this reason many half-demons were born there. But one day, four powerful and evil youkai captured the island, killing almost all of the villagers.

At the time of the plot, Inuyasha and his friends come across this island. They also meet Asagi, who is to be sacrificed next by the four youkai, so that they can get their strength. Inuyasha can save Asagi, then fight with his friends against the evil youkai who have conquered the island.

When these youkai are destroyed, Asagi and her friends can leave the island. They are looking for a remote place in the mountains, where they can live in peace and harmony. 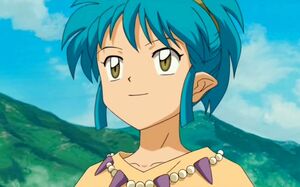 Asagi and Inuyasha in the fire. 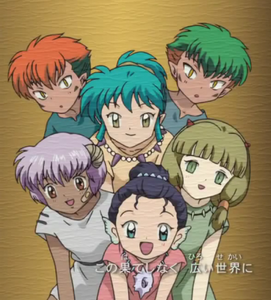 Asagi and the children.
Add a photo to this gallery

Retrieved from "https://hero.fandom.com/wiki/Asagi?oldid=2283061"
Community content is available under CC-BY-SA unless otherwise noted.