Servant of the Villain
Grey Zone

Asajj Ventress is a major antagonist-turned-anti-heroine in the Star Wars franchise. Despite her antagonistic history, she is a complex character who slowly but steadily develops into the moral anti-hero during the 4th season of The Clone Wars.

Asajj Ventress had a tragic life, she started out as caring, kind, but hardened her heart when her first master Ky Narec died. She fell into darkness giving into her emotions of resentment and rage. Ventress had a short temper quick to be angered or infuriated during battles and lightsaber duels. As opposed to her recklessness, she was known to be cunning and swift in the long run. Asajj was known to be vindictive and when she was betrayed by her master, she desired nothing more then vengeance against him. Ventress returned to her kin, the Nightsisters, and with their help recruited Savage Opress and treated him like a slave which ultimately caused him to turn against her and thwarted her plans. After her people were massacred, Ventress was once again alone without a family and wandered the galaxy. Overall Ventress is highly cunning, mysterious and even sophisticated.

Ventress became a bounty hunter wanting to take on dangerous missions with big payouts. Her attitude towards missions involving people were softened as she freed the Kage hostage Pluma Sodi. She no longer wished to kill anyone anymore and rescued Obi-Wan from the returned Sith Lord Darth Maul but was really interested in the bounty that was on them. She encountered Ahsoka Tano when she was on the run from the Republic and sympathized with her when her master abandoned her as well and tried to help her clear her name.

Near the end of the war, she encountered Quinlan Vos who asked for her help to assassinate her former master Count Dooku that strengthened her compassionate and trusting side leading to romantic feelings for the maverick Jedi. Vos later gave into the dark side and in the end, Asajj told him not to give into hate and experienced the light that embraced her before sacrificing herself to save Quinlan. Asajj Ventress fully redeemed herself over everything she had done and been through and gave her life for love that she finally received.

Asajj Ventress once was trained under a Jedi named Ky Narec prior to the events from the Clone Wars. When her master was killed by space pirates, she took revenge on them and killed them out of anger. In doing so, she crossed path into the Dark Side of the Force. Soon afterwards, Count Dooku saw her potential and trained her as his apprentice, thus making her merciless as she proceeded to battle against the Jedi.

Overtime however, her power with the force apparently got on the nerve of Darth Sidious (Emperor Palpatine). Fearing that she might overpower him eventually as the new Sith Lord, Sidious ordered Count Dooku to kill her. After narrowly escaping death, Ventress returned to her home planet, where she reconciled with the Nightsisters, there she began plotting vengeance against Dooku. Before the assassination plot was put into motion however, General Grievous intercepted the Nightsisters and killed them all, except for Ventress.

Ventress then retreated to Mos Eisley, where she met Boba Fett and briefly worked with him before parting ways. Her complex character showed a noble quality to her, such as later on as The Clone Wars progressed, she would also fight alongside Obi-Wan against Darth Maul, as well as assist Ahsoka Tano after she was falsely accused of crimes by the Jedi Court. She helped Anakin Skywalker figure out that Barriss Offee was the true cause.

Eventually, when the Jedi wanted to learn more about Count Dooku and his whereabouts, they sent a Jedi named Quinlan Vos to find her and gain her trust. Ventress learn about the his scheme as a spy but nonetheless agreed to assist him in some form, largely because the two had similar personalities. Later, she also was smitten by him. In her last moments, she sacrificed her life for Vos, never succeeding in her go to kill Count Dooku and get her revenge on him. 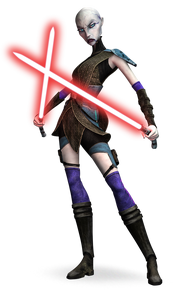 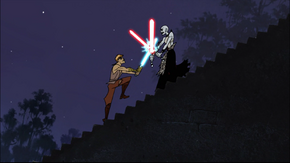 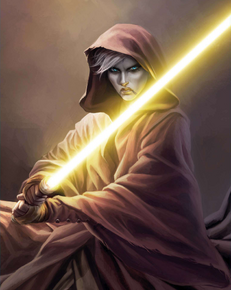