Asbel Lhant (アスベル・ラント Asuberu Ranto?) is the main protagonist of Tales of Graces. He is the eldest son of Aston Lhant, the Lord of the Lhant territory, located in the border zone between the countries of Windor and Fendel. From an early age, he was taught the skills necessary to inherit the title of Lord by his father and his butler, Frederic, but secretly aspires to become a knight. He one day decides to enlist in the Knight Training Academy in the capital of Windor and became devoted to his training, eventually growing into a polite and diligent young swordsman.

Asbel is the eldest son of Lord Aston, ruler of the city-state of Lhant. As a child, he was disobedient, adventurous and quick to make friends. Due to an incident during his childhood, he leaves his home and trains to become a knight, in order to find the power to protect those he cares about. He is forced to return to Lhant after hearing news of his father's death, only to receive a tepid welcome.

Throughout the game, Asbel struggles with the idea of responsibility he has as the next Lord of Lhant and his desire to keep his loved ones safe.

Asbel is a spirited young man with a very strong sense of justice, even more so for that of a knight. He fails to turn away from those in need, and once he has decided on a path it is unlikely that anyone would deter him from it. He may be seen as naive and young, as Malik often states, usually stating ideals considered impossible, such as "saving everyone". After losing someone important seven years prior to the main scenario, he becomes a lot more self-aware about his actions and takes responsibility for his own actions.

Tales of the World: Radiant Mythology 3

Asbel appears in the remake of Narikiri Dungeon as a cameo costume usable by Dio. To obtain the costume, the player must insert a password on the character menu. When Dio wears the costume, the battle music changes from Take Up the Cross to Battou! Togisumase!, the second normal battle theme from Tales of Graces.

Asbel is a knight who belongs to the Kingdom of Garbanzo, serving as a subordinate to Flynn Scifo. He travels with Sophie to find Princess Estelle in order to bring her back to the kingdom. They board on the Van Eltia and discover her as part of its crew. However, Estelle refuses to leave until she completes her mission to seek out incidents caused by overuse and exploitation of Hoschia crystals. Asbel agrees with Estelle's ideal, and he decides to join the Ad Libitum guild to protect the people of the kingdom with Estelle. Asbel briefly mentions his brother and father in some skits. In one such scene, Cheria tells Kyle that Asbel's father died through an unknown cause, rather than having been killed during battle.

Asbel is seen in Tales of Gekijou, a series of animated shorts included as part of the preorder bonuses of Tales of the Heroes: Twin Brave. Asbel is shown in the second episode, in which Cheria needs help to carry important materials. When Zelos Wilder appears to declare his intention to date Cheria, Asbel battles with Zelos to protect Cheria's belongings. Asbel is shown again in the third episode, in which he is sparring with Guy Cecil. At the end of the episode, he is seen being chased by Leon Magnus after nearly killing him. 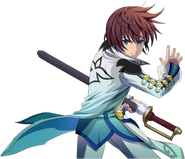 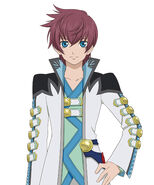