Tales of the Abyss

Asch the Bloody is a God General of the Order of Lorelei. He can be arrogant and rebellious, and almost always seems angry. He has a tremendous amount of pride and cares deeply for his country and the people around him. He is also an extremely talented cook. Despite his smart and calculating exterior, Asch has moments of incredible goofiness. At one point he masquerades as Luke and is asked (by someone who had met Luke a few days previously) how his hair had changed from short to long in such a short time. Asch's improvised excuse was, "My hair grows fast."

Most of what Asch does is the "behind the scenes" work - though works towards the same goal as Luke and friends. However, most of the time, he outright refuses to work with them. At the end of the game, he even fought Luke over who would fight Van.

He was voiced by Chihiro Suzuki in the Japanese version, and by Yuri Lowenthal in the English version.

Asch used to be the original Luke fon Fabre until Van Grants kidnapped him and replaced him with a replica.

Asch openly despises Luke as the person who replaced him. He hates how Luke considers himself (as the clone) to be the inferior one, as not only is he a copy of Asch (and Asch has a tremendous amount of pride) but he was the one who essentially usurped Asch's life with no effort whatsoever. He also considers them rivals in swordsmanship as they are both pupils of Van.

Although he thinks that Luke is supposed to be his replacement, and thus the same as him, there are many things in the game that say otherwise. Perhaps the most obvious of these is that Luke's hair is light at the ends, and Asch's is darker. Their clothing is also like this, with Luke's white and gold contrasting with Asch's black and silver. Yet another difference between them is that Luke is left handed, and Asch is right handed. Also, as Luke gradually changes throughout the game, Asch always stays the same.

Luke and Asch fought (due to Asch's stubbornness) at the end of the game to settle the issue over who the "real" Luke was. In the end, Luke did win, yet Asch still thought of Luke as his replica. One of his last actions was to take his name back as his own, as a small step in accepting Luke, and acknowledging that he wasn't inferior.

Upon his death, he gave Luke some of his power, allowing Luke to use second-order hyperresonance (and to fully control it at that). It gave Luke the power he needed to finally defeat Sync and Van. After Luke defeats Van, he stays behind to release Lorelei. While he is sinking into the core of Auldrant, he catches Asch's corpse. After being released, Lorelei thanks Luke, then a surge of energy surrounds him and Asch, and Asch's hand twitches.

Asch is a very cold and impersonal man. This is a result of his upbringing, where he was not only groomed from birth to become the ruler of Kimlasca, but also treated very coldly by his father, who knew his son was destined to die at Akzeriuth. Thus, Asch separates his internal emotions from his external appearance. He is also forced to do this after he becomes Van's servant in order to hide his true intentions while appearing subservient. Asch has a tremendous amount of pride and cares deeply for his country and the people around him. He is extremely short-tempered and hot-headed, even more so than Luke, and nearly always insists on doing things on his own.

Asch fights in the "Albert" style of swordsmanship, which focuses on strong, concise strikes that yield heavy damage, while sacrificing speed for more defensive tactics. His attack movements are very similar to Luke's abilities, but Asch wields his weapon in his right hand, providing the illusion of him mirroring Luke's movements in battle. While he and Luke share mostly similar move lists, Asch also has access to four fonic artes and all sidequest-related attacks. Asch is the only major character who has only one mystic arte, but he is one of only two playable characters who have access to all AD Skills in the game. 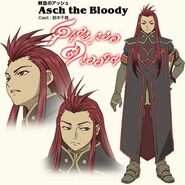