Member of the Team Squad (formerly)

Defeat Invictus and the titans and save the universe.(formerly)

Help Invictus get out of Final Space. (suceeded)

She is voiced by Ashly Burch, who also voiced Chloe Price and Molly McGee.

Ash Graven originated from the planet Serpentis, to which she was going to be sacrificed to a snake-like god named Warthrent along with her younger sister. She only found this out once her biological father told her. Watching her little sister getting eaten by Warthrent, with no way to stop it, triggered something inside of her, which was her power. After blowing an attack at her parents, killing them, she made a run for it, to which Fox spots her, stopping the repair of Clarence's ship. Clarence gets mad, until he spots Ash running toward them, and probably witnessed the attack. Somewhere along the line, she gets adopted by Clarence and starts her new life with her new family. Sadly, she was never truly able to get over the trauma, and it probably is the cause of her personality.

Later on in the series, after nobody gave praise to Clarence, he called Ash and Fox ungrateful and disowned them, later leaving Fox to die.

Ash has light blue skin, pink eyes, and long pink hair that covers her nonexistent right eye (which Invictus gave her right eye later). She wears a black, body glove-like garment with black, fingerless gloves, a gray cowl with purple vertical lines and matching skirt with a simple purple snake head on the front, gray gauntlets with purple screens on her forearms, pink leggings, gray boots with purple knee pads, a pink snake armband on her upper right arm, an amulet with a pentagon shaped gem around her neck, and a magenta choker. After Invictus gave her an actual right eye, Ash now has the body of an adult, with her hair now a swirl shape and both sides of her head shaved.

Ash has been shown to have Dark Energy-like powers which gives her Pyrokinesis, Levitation, & Telekinesis. When her powers are active, she is surrounded by a purple aura & the white of her eye turns black. However, she does not have full control over her abilities and needs to be triggered by something (such as thoughts about going to prom with her old crush, Jordan Hammerstein) in order to use them. In "The Grand Surrender", the origin of her powers are revealed. She gained them after watching her sister Harp get eaten by their home planet's snake god. She used her powers to escape but accidentally killed her parents in the process. 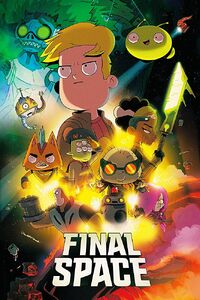 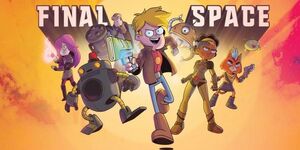