Spend time with her crew and her lover Qarl the Maid

Depose her evil uncle Euron (failed)
Become the Queen of the Iron Islands (gave up in the novels due to Stannis defeating her; failed in the TV series)
Save her brother Theon from being killed slowly by Stannis and the Boltons
Bring peace and change the lifestyle of Ironborn (failed)
Secure the Ironborn's independence
Ally with Daenerys Targaryen and her armies (succeeded)
Defeat Euron and claim the Iron Islands (TV series only, failed)

In the television adaptation Game of Thrones, she is renamed Yara Greyjoy to avoid confusion with the wildling Osha and is played by Gemma Whelan.

As a child Asha was a skinny girl with a face full of pimples. The adult Asha is lean and longlegged, with black hair cut short, wind-chafed skin, and strong hands. Theon thinks her nose is too big and too sharp for her thin face, but feels that her smile makes up for it. Asha is fierce and proud, and defies traditional ironborn gender roles by commanding her own ship, the Black Wind, and leading men into battle.

Asha was fairly unattractive in her youth. Her uncle, Victarion Greyjoy, remembers Asha as a little girl swimming naked in the sea and playing with her doll. After Theon Greyjoy's departure for Winterfell to be Eddard Stark's hostage and ward, Asha became Lord Balon Greyjoy's only remaining child in Pyke. Her mother, Lady Alannys Harlaw, fostered five boys at Pyke after Theon's departure. Tristifer Botley, the boy closest to Asha in age, developed an infatuation with her when they went through puberty, but Asha did not reciprocate his affections.

Years later, Asha grew into an attractive and bold young woman, and Balon effectively raised her as his heir. However, Asha preferred Ten Towers, the seat of her uncle Lord Rodrik Harlaw, to Pyke. She lost her virtue at age 16 to a sailor from Lys. In 293 AC or 294 AC Asha sailed the Black Wind on a trading voyage which included stops at Fair Isle, Lannisport, and the Arbor, where she introduced peaches to one of her lovers, Qarl the Maid.

Balon is greatly proud of his wild headstrong daughter, and believes she can succeed him, although it is doubtful the other ironborn would accept her as their queen. He wishes Theon dead so he would not stand in Asha's way, though this resentment has been cut from the television series, where Balon appears to be genuinely saddened after "losing" Theon to the Starks.

Asha's uncles Victarion, Aeron Damphair, and Rodrik "the Reader" Harlaw respect her and acknowledge her power, but do not believe she can rule the ironborn due to her gender. Other ironborn often mock Asha ribaldy. However, Asha is confident and strong-willed enough to dismiss such attitude scornfully, and she always talks back sharply and makes fun of those who taunt her.

Asha's crew adore her devotedly. Half of them love her as their daughter, the other half want to have sex with her, and all of them would die for her.

During the War of the Five Kings Balon declares himself King ot the Iron Islands once more and rallies the noble houses of the Iron Islands. With King Robb Stark fighting in the westerlands and the riverlands, the north is left in a weak position and surrounded by enemies. He gathers the Iron Fleet at Lordsport and forces any other travelling ship to remain at least until he takes the north. While her uncle Victarion is to lead most of the fleet to the Neck and capture Moat Cailin to hold the entire north, Asha takes 30 and captures Deepwood Motte. Meanwhile Theon raid the Stony Shore with 8 ships with uncle Aeron and Dagmer Cleftjaw and later he takes Winterfell. Theon sends ravens to King Balon, Asha, and Victarion for reinforcements to hold Winterfell. He's ignored by his father and uncle and refused by his sister, who gives him only 10 men and leaves after urging him to burn Winterfell and flee before the northmen can kill him for the murder of the Stark boys. After the Boltons burn Winterfell, Dagmer's force captures Torrhen's Square, while the ironmen captures some towns and lands. Asha keeps holding Deepwood Motte, while Lord Galbart Glover and his brother Robett Glover are fighting for Robb. She holds hostages Robett's wife, Sybelle, and his children Gawen and Erena. Her father styles himself King of the Isles and the North.

Some time after Winterfell was sacked, Asha comes there, but finds only unrecognizable dead bodies, partly eaten by wolves. She believes Theon is dead, but admits she cannot be certain. She, not Balon, receives a taunting letter from Ramsay with a piece of Theon's skin when she returned to Deepwood Motte and only after the kingsmoot. That makes her realize what has become of her brother, but unlike in the show she never attempts to save him from the Dreadfort.

Asha loves her father, but considers him as "a brave man but a bad lord". She realizes that the ironborn have gained nothing from his military campaigns - the Greyjoy Rebellion and the invasion to the north - only casualties. She believes it would be best for the ironborn to make peace with the north, and this is her main platform at the kingsmoot.

Asha becomes a POV narrator starting in the fourth novel, A Feast for Crows. This storyline was pushed back so it corresponds to TV-Yara starting in Season 6. Season Six incorporates the Ahsa storyline from the novel but changes some of the order of events. In A Feast of Crows, Balon is dead by the time that Yara returns to the Iron Islands. Instead of visiting Pyke, she visits her uncle Rodrik Harlaw in the Ten Towers, bringing with her the Glover family. Despite these differences, the TV series still incorporates Asha's character including her intention to succeed her father as ruler of the Iron Islands and her criticism of Balon's war strategy in the North. The death of Balon is first reported as an "off-screen" event in A Storm of Swords, in which he's murdered by a faceless man on the orders of his brother Euron Greyjoy. Asha is not present at her father's funeral.

Asha's reunion with Theon occurs under very different circumstances in the fifth novel, A Dance of Dragons. Asha, who by this stage has been taken prisoner by King Stannis Baratheon, encounters a dishevelled and battered Theon; who had recently rescued the false "Arya Stark" (actually Jeyne Poole) from Ramsay Bolton. By that stage, the Kingsmoot has already occurred with Asha and her followers fleeing back to Deepwood Motte in the wake of Euron's victory. In the novels, Asha initially does not recognize Theon - in her eyes he is an old man, resembling a scarecrow, his face is a skull with skin, his hair bone-white and filthy; a reversal of their first reunion on Pyke in A Clash of Kings. When Stannis intends to execute Theon for his role in the alleged murders of Bran and Rickon, she pleads for his life. When that fails, she petitions Stannis to execute him with the sword to spare him a painful death by burning.

Asha learns soon about her marriage with Erik Ironmaker. She is not annoyed for being married without her consent to a man who is old enough to be her grandfather, nor does she dedicate any thought whether the marriage is valid and can it be annulled - she simply accepts that as a fact. She reluctantly admits that it was politically wise of Euron: he turned a rival into a supporter, secured the isles in his absence, removed Asha as a threat, and probbaly had a good laugh of using a seal as a proxy. After the kingsmoot Asha returned to Deepwood Motte with Sybelle Glover, but left the Glover children at Ten Towers.

At Deepwood Motte, Asha considers her options: go to Torrhen's Square, which is still held by Dagmer Cleftjaw; make new life as a trader; settle at Sea Dragon Point; return to the Iron Islands and try to raise the ironborn against their new-crowned king. Tristifer Botley, who wishes to marry Asha, tells her about Torgon. The fact that in the past a Kingsmoot was ruled unlawful gives Asha an idea, but before she has a chance to think it over, Stannis attacks Deepwood Motte, destroying nearly all Asha's troops and taking her captive. Asha believes that now she has no hope to claim the Seastone Chair: the ironborn are not a forgiving people, and she has been defeated twice - by Euron at the kingsmoot and by Stannis.

Stannis takes Asha with his army, a prize to show the north that he can vanquish the ironborn. Asha, however, knows better: bringing down a woman will not awe any Northmen, thus her worth as a hostage is less than naught. Her uncle Euron rules the Iron Islands now, and he does not care if she lives or dies. It may matter some to Erik, but he does not have enough money to ransom her (even if Stannis ever agrees to release her for a ransom). Asha sees no point explaining that to Stannis, especially after she makes the mistake of mentioning Robert to him.

During the march to Winterfell she's guarded by Alysane Mormont and bullied by Stannis's torturer, Ser Clayton Suggs and she's afraid of the laud and aggressive queen's men. A knight named Ser Justin Massey spends a lot of time with her. Asha finds him unimpressive, because he is not an ironborn and too much of a gentleman - definitely not her type. She is told that Ser Justin wants her - namely, her lands. His ancestral holdings were lost to him, so he seeks an advantageous marriage. No doubt he dreamed of putting her in the Seastone Chair on Pyke and ruling through her, as her lord and master. Asha, who knows how her people think, is aware that it is impossible: that would require ridding her of her present husband and Euron. She muses that Euron could eat Ser Justin for breakfast and wouldn't even belch. Morever, her father’s lands will never be hers, no matter whom she marries: her political position has been weakened seriously due to her two recent defeats, more than enough to stamp her as unfit to rule. Wedding Ser Justin, or any of Stannis Baratheon’s lordlings, would make her people despise her for marrying a "soft green land lord". Still, Asha does not deflate Ser Justin because he brings her food and wine, his company is much better than others of Stannis's host, and he is one of the few who'd object to sacrifice her to R'hllor.

On the sample chapter of the sixth book, Theon overhears Ser Justin requests permission from Stannis to marry Asha, reasoning that one day Stannis will need to take the Iron Islands, and that will go much easier with Balon Greyjoy's daughter as a catspaw, with one of his own leal men as her lord husband. Ser Justin claims the fact that Asha is currently married is not a problem: her marriage was done with a proxy, and was never consummated, therefore can be annulled; besides, Eric Ironmaker has one foot in the grave. Stannis thinks it over and answers "Serve me well in this matter of the sellswords, and you may have what you desire. Until such time, the woman must needs remain my captive". 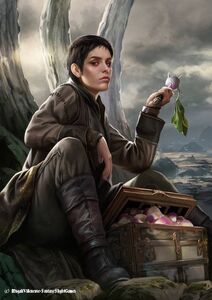 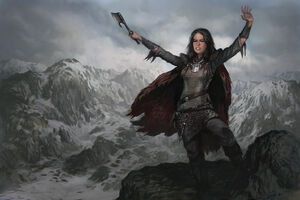