Start a Wiki
Ashchu or Ashachu by the fans is the transformed form of Ash Ketchum from Pokémon.

After Ash freaked out about becoming a Pikachu, he played with his Pikachu and the other Pokémon. At the end of the episode, Ash - still a Pikachu - was rolling on the floor laughing. However, Ashchu turned back into Ash during the next episode.

He is actually Ash Ketchum in a form of Pikachu with yellow hair and ears like the regular Pikachu.

Though this was a very minor occurrence in the Anime series, it has become a target among some fans, being used in fan-fiction or fan art. Usually, Ashachu commonly makes cameos in the Pokémon series Sinnoh. 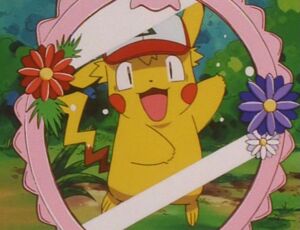 Ash Ketchum screaming comically upon being turned into a Pikachu

Retrieved from "https://hero.fandom.com/wiki/Ashachu?oldid=1709385"
Community content is available under CC-BY-SA unless otherwise noted.