Edelgard von Hresvelg
Those Who Slither in the Dark

Ashe Ubert is a playable character that appears in Fire Emblem: Three Houses. He is a student at the Officers Academy who hails from the Holy Kingdom of Faerghus, and is a member of the Blue Lions. He is 16 years old at the start of the game.

Ashe is generally a friendly and optimistic individual. He is very considerate of others and always tries to help or encourage those who need it. He is rather empathetic of thieves and other individuals in disadvantageous situations, being a former thief and orphan himself. Though there are times when he can get rather serious depending on the issue or situation being discussed.

Ashe is notably a firm believer of pursuing one's dream, such as his dream of one day becoming a knight just like in the stories he reads. According to Dimitri, Ashe is very earnest and approaches any task with some eagerness. He's noted to be a great cook, as he often helped his father in their restaurant.

Ashe hates when people are used and then thrown away. He is very devoted to his family, as he retorted to thievery only in order care for his siblings.

He holds great respect and gratitude towards Lord Lonato, who took him in, raised him as his own, and sent him to the Officers Academy despite him being a commoner. He is a serious young boy, who studies and trains hard so he can become an outstanding adult like his benefactor.

Ashe was born as the eldest son of restaurateurs in the Gaspard region. He was happy with his parents and two younger siblings, often helping them at their restaurant, until his parents eventually died from a disease, leaving him as the sole provider. Ashe tried to work honestly for money, but still it was not enough. He eventually turned to thievery, an act he deeply regrets. His final theft was when he broke into a mansion at age 10. Inside, he found a book called Loog and the Maiden of the Wind. Impressed by the gallant looking knight on the front cover, he coveted it despite the fact he could not read at this time. He was promptly discovered by the mansions owner, but rather than have Ashe arrested, the noble opted to give him the book and even teach him how to read. Having heard of his family situation, the noble, Lonato adopted Ashe and his two siblings, giving them a chance at a better life, an act that Ashe was forever grateful to have received. He also became quite close to his adoptive older brother, Christophe.

However, three years later, Christophe was executed by the Knights of Seiros. The event disillusioned Lord Lonato with the Church, though Ashe was not involved in this, nor did he even know that Lonato had changed.

Much to his horror, Ashe learns that Lonato is leading a rebellion against the Church of Seiros during a skirmish. While he begs Lonato for answers, he refuses to explain and at the end of the battle, Lonato is killed.

Ashe would question his motives with little answers. Even after it is revealed that the West Church had spurred Lonato into the rebellion, he still finds little solace in the revelation.

Ashe sides with the Blue Lions during the war unless recruited to the Black Eagles. He, along with the rest of his class, reunites with Dimitri and Byleth at Garreg Mach five years after the war began, and accompanies the protagonist through the rest of the war. In Silver Snow and Golden Deer, he returns to Faerghus and joins House Rowe. He ambushes Byleth and their army in Ailell under the command of Lord Gwendal. If Ashe was recruited before the timeskip, he can be spared and join Byleth's army. In Crimson Flower, if he is not recruited, Ashe is seen defending the capital city of Fhirdiad from Edelgard and her army in the final battle. 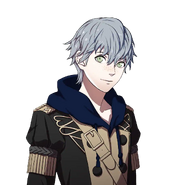 Retrieved from "https://hero.fandom.com/wiki/Ashe?oldid=1955041"
Community content is available under CC-BY-SA unless otherwise noted.