Heroes Wiki
Register
Don't have an account?
Sign In
Advertisement
in: League of Legends Heroes, Female, Patriots,
and 34 more

Leader of the Avarosan Tribe

Wielding the bow of True Ice

Unite the Freljord for Avarosans. (both ongoing).

Ashe, also known as The Frost Archer is a heroic playable character and champion in League of Legends, and is the titular main protagonist of the Ashe: Warmother comics. She's the leader of the Avarosan Tribe in Freljord who's believed by them to be the reincarnation of the mythical heroine Avarosa, who the tribe is named after.

Released on February 21, 2009, Ashe is one of the 17 original champions featured in the game at launch. She is most commonly played in the bot lane.

She is voiced by Melissa Hutchinson.

Ashe is the Iceborn leader of the Avarosan tribe of Freljord. As the Warmother of the tribe, Ashe is in charge of commanding the populous horde. While intelligent and independent, Ashe is still uncomfortable with her position as head of the group. She's a formidable opponent in battle due to, along with her wits and physical abilities, her wielding of a bow of True Ice which she gains access to by tapping into the ancestral magics of her lineage. She is believed by her people to be, in fact, the reincarnation of the mythological hero Avarosa. Above all, she strives to unify the Freljord once more by reclaiming their ancient lands that they once thrived on. 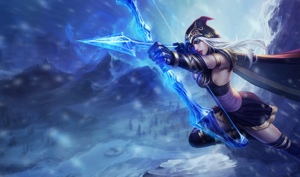 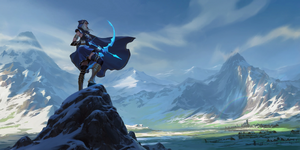 Ashe as she appears in Legends of Runeterra. 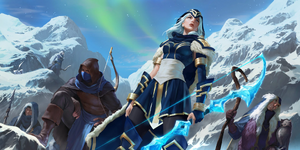 Ashe in her short story, "The Harder Path". 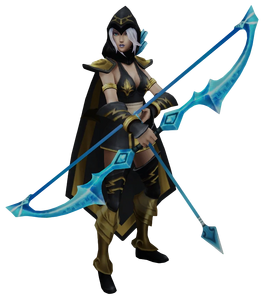