The Lost and Damned

She was voiced by Tracey Godfrey.

Ashley was born in Liberty City and knew several of the members of The Lost Alderney Chapter since childhood, including Johnny Klebitz. After joining The Lost, she became Johnny's girlfriend, and also became a drug addict, using cocaine and crystal meth.

Her addictions, coupled with her infidelity (which was many times induced by her desire to obtain cheap drugs), eventually led to Johnny breaking up with her, which had a devastating effect on Ashley's life, severely increasing her drug problem.

Eventually, her addictions later led to her being held-up in a crackhouse by some drug dealers when she couldn't pay them, though Johnny managed to save her. At some point, Ashley begun a relationship with Ray Boccino, a capo of the Pegorino Family.

Ray used this to his advantage, convincing her to use The Lost to steal several diamonds, which originally belonged to Ray Bulgarin. Despite this, he is shown to have genuine concern towards her and her addiction. She also borrowed money from the Russian Mafia to pay for her habit. This led to her becoming in debt to Dimitri Rascalov, and Johnny and Malc are forced to kidnap Roman Bellic to settle it.

Later, Ray orders Johnny to take part in a deal exchanging the diamonds, which were stolen previously for money. However, the deal is ambushed by Luis Lopez. Among the confusion, Johnny decides to take the money for himself and The Lost. He then gives it to Jim Fitzgerald for safekeeping.

Ashley unwittingly informs Ray of this, so he has Jim kidnapped and tied up in his basement to be tortured, in hopes that he will reveal what happened to the money. Johnny is lured to Ray's, but the two escape before parting ways. Ashley then calls Johnny to warn him that some of Ray's goons are in pursuit.

Although he manages to escape successfully, Ashley informs him that Jim was killed, and that Billy Grey is planning on turning states while in prison, pinning a drug ring on The Lost. After completion of The Lost and Damned's storyline, she is not seen again.

However, if Johnny calls Ashley, she'll ask for forty dollars. Johnny declines, saying that she can kill herself on her own. She also e-mails Johnny, saying that she checked into rehab, and is doing well. Johnny wishes her good luck, but also tells her to stay away from him.

A few days later, she sends Johnny another email reluctantly confessing that she was booted out of the rehab facility and asking Johnny for yet more money, to which Johnny reinforces his wishes for her to stop contacting him.

At some point between 2008 and 2013, Johnny, Terry, Clay, Ashley, and several other members of The Lost MC relocated to Blaine County, where they set up a new base of operations. The gang would then become heavily involved in drugs and arms trading.

Ashley and Johnny got back together, and Johnny himself also got addicted to meth like Ashley. The gang also became affiliated with Trevor Phillips, but the relationship seemed shaky, as Trevor would often have sex with Ashley, much to Johnny's dismay. Ashley's appearance during this time also radically changed; her hair color changed from black to red, and she became thinner and more haggard (likely a result of meth use).

Some time in 2013, Johnny confronted Trevor again for having sex with Ashley. Trevor, who had just found out about Michael De Santa's survival after a witness to a jeweller's robbery had revealed Michael's cathcphrase, finally snapped after Johnny's smack-talking, and retaliated by swiftly smashing his beer bottle on his head. Ashley, along with Ron Jakowski and Wade Hebert, watched in horror as Trevor repeatedly stomped the glass pieces on Johnny's head. 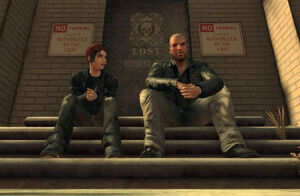 Ash and Johnny in "Was It Worth It?".
Add a photo to this gallery

Retrieved from "https://hero.fandom.com/wiki/Ashley_Butler?oldid=2200087"
Community content is available under CC-BY-SA unless otherwise noted.