Member of the Brotherhood of Shadow. (formerly)
Wandering demon exterminator.
Goddess of light (in her MKA ending)

Can fire energy blasts in the form of white light

Slay enough demons to gain ascension from the Netherrealm.

Gain the god-like powers of Blaze to become a goddess of light purify the wicked in all the realms.

Unnamed sister (also a member of Brotherhood of Shadow, killed by Ashrah)

Ashrah is a heroine in the Mortal Kombat fighting game series, who made her debut in Mortal Kombat: Deception.

Unlike most demons residing in the Netherrealm, Ashrah was very conscientious, questioning an order given to her by her former superior Quan Chi.

In Deception, she sought purification and liberation from the Netherrealm and becomes very attached to the mysterious Kriss blade (the very instrument that ultimately lead to her freedom from that realm).

In her non-canon Armageddon ending, Ashrah become the personification of divine light and made it her mission to expel the hearts of the wicked.

Like many other kombatants in Armageddon, Ashrah wished to claim the power of Blaze for her own personal goal. In all the Mortal Kombat games Ashrah wants to get eliminate all demons, evil and all wickedness. She is obsessed with no longer wanting to be a demon and wants light to win over darkness. Ashrah wants evil to be permanently erased.

Ashrah was originally a demon native to the Netherrealm. She and her sisters served Quan Chi and the Brotherhood of Shadows for ages. After questioning an order given to her by Quan Chi, and the evil sorcerer has her sisters hunt her down to slay her. Ashrah successfully escaped their clutches and stumbles across a holy sword known as the Kriss blade. With the Kriss blade in her possession and after slaying a demon with it, Ashrah felt the sensation of purification and has made it her goal to slay enough demons to gain ascension from the Netherrealm.

Ashrah had finally achieved her goal and transcended from hell and stumbled into an unfamiliar realm, the celestial beings there tells her that the blade was a tool, able to transform its wielder into a warrior powerful enough to purify the world. Awestruck by the celestial being words, she has made it her mission to purify and bring peace to the realms (in the hopes of reaching total ascension).

Her first mission was to travel to Vaeturnus, where the vampire race resides, the beings tell her that they were evil creatures that fed off the blood of others and spread their corruption unhindered throughout the realms. Ashrah successfully slayed most of them, until she encountered and was bested by Nitara in combat. Ashrah chases her into Edenia with the hopes of gaining enough power to slay Nitara, in order to reach her ultimate goal.

In her non-canon ending, Blaze godlike power had caused Ashrah to transformation into a being of divine light. Her very presence purified the souls of the tainted. She traversed the realms in search of evil, pacifying the wicked. Her mission came in full circle when she purified the sorcerer who would have her slain: Quan Chi.

Ashrah from having possession of the powerful holy Kriss blade in her possession, was able to clean the soul of its user. By slaying demons, the wielders soul becomes more pure/holy, effects that are shown in Ashrah. The blade doesn't just affect the user's essence, but their personalities (defecting from Quan Chi's Brotherhood of Shadows). Although a demon, Ashrah wields holy powers (possibly as a side effect from the wielding the Kriss blade). 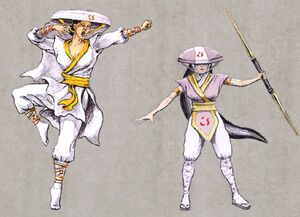 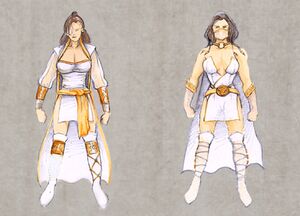 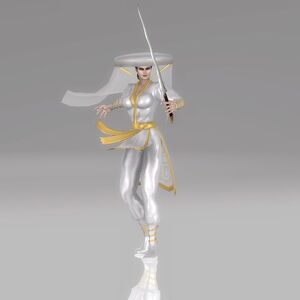 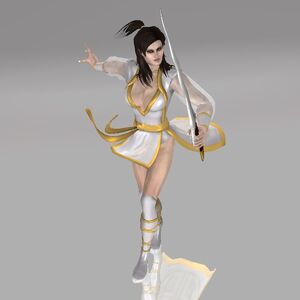 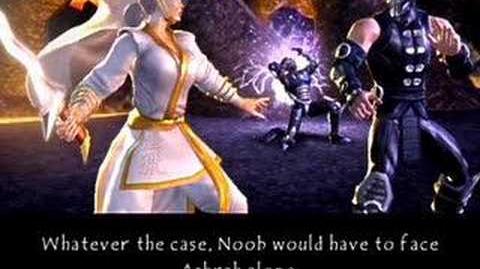