Heroes Wiki
Register
Don't have an account?
Sign In
Advertisement
in: Article stubs, One Piece Heroes, Male,
and 32 more

Overthrown Kaido and Orochi. (succeed at the cost of his life)

Ashura Doji better known to his criminal alias as Shutenmaru, was one of the major characters of One Piece Wano Country Arc. He is one of the Kozuki Clan's retainers, Red Scabbards. After Oden's death, Ashura left the Kozuki family and became a leader of criminals known as Mt. Atama Thieves. After his former mentor, Shimotsuki Yasuie's death, he reconsidered to join back to his fellow retainers to overthrow Kaido and Orochi. He was killed by Kurozumi Kanjuro.

He is voiced by Nobuo Tobita.

Ashura is loyal to the Kozuki Clan when he address Oden as Oden-Sama. After Yasuie's death by Orochi, he rejoined his fellow retainers to overthrow Kaido and Orochi.

Ashura is brave and almost fearless as he refuse to submit himself to the likes of his enemies such as Kaido and Orochi when he attacked Jack. 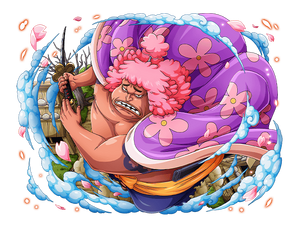