Work together toward Asian prosperity (achieved)

Military
The Asia Alliance is the superpower of the 22nd century dystopian cyberpunk world of Masamune Shirow's Appleseed manga and anime.

The rise of the Asia Alliance to global primacy can be traced back to 1989, when Asia-bashing started in the West due to the Tiananmen Square incident in China and the beginning of the democratization movement in Japan. Several years later in 1992, what was to be the main foe of the Far East was established, the European Community (E.C.). A few years later, to the horror of the world, a nuclear war erupted in the Middle East in 1995 when Israel used its nukes against the Arab states which attacked it in the 5th Middle East War.

World War Three in 1995 was the result as the Soviet Union intervened in the Middle East on the side of the Arabs, suppressing Israel and advancing into the Mediterranean. Which resulted in clashes with the armed forces of the E.C. Within a few months the conflict went nuclear in 1996. The nuclear exchange turned much of the Soviet Union, Europe, and the United States into desolated areas. Only reason it did not wipe them off the planet and result in a global nuclear winter is that due to arms reduction treaties the nuclear arsenals had been greatly reduced and because of poor maintenance many missiles and warheads did not launch, missed their targets, or failed to detonate.

In the aftermath of the nuclear world war, the West and the Soviet Union were economically crippled. Asia in turn had come out unscathed apart from the radioactive fallout. In 1999, due to the damaged to the West caused by World War 3 and the wealth of Asia, the Europeans became envious and turned hostile toward the Far East. The E.C. begins to take repressive actions around the world to the dismay of the Asian nations.

World War 4 erupted in 1999 as the European-American alliance went to war against Asia. It was a war fought with conventional weapons, since all the nuclear weapons in their arsenals had been used in the previous war or were inoperable. It was a dirty, bloody war of attrition that lasted over two decades and a half. China was hit by a giant meteor in the 1st year of the war, and Beijing was annihilated. The loss of central authority forces the democratization of China.

In 2000, the nations of Asia experience severe food shortages forcing them to cooperate with each other. A few years later, Japan invents the technology to remove radiation called "radiation scubbers" which aren't used till 2015. Learning form the Europeans, the states of the eastern part of Asia join forces and the Asia Alliance is established in 2005. England drops out of the war in 2024 and by 2026 the Asia Alliance had won the war.

As of the mid-22nd century, the Asia Alliance is an economic and political bloc that consists of both East Asia and Southeast Asia, and most of South Asia. Which is the world's dominant economic, technological, and geopolitical power. It is a region of peace and prosperity, relatively speaking compared to the rest of the world as it is not plagued by wars or famines.

China is continuing it's rise as a democratic nation-state. India has an aggressive space program. Japan has built a maritime nation of islands, both natural and artificial called Poseidon. Using the Japanese radiation scrubbers, most of the world has either been cleaned of radiation or in the process of having its radioactive fallout removed. The Asia Alliance is supporting the rebuilding of the poverty stricken and technologically backward southern hemisphere whose environment was damaged by the radioactive fallout from World War Three.

The world leader in technology is the Asia Alliance and the man-made island nation of Olympus, possessing; 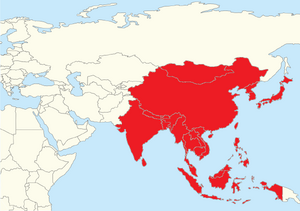 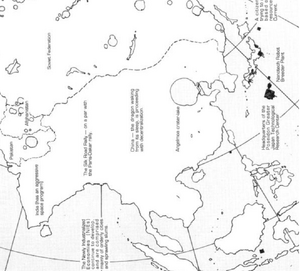 Asia Alliance, Map (Appleseed Databook)
Add a photo to this gallery
Retrieved from "https://hero.fandom.com/wiki/Asia_Alliance?oldid=1358132"
Community content is available under CC-BY-SA unless otherwise noted.