The Chronicles of Narnia

Free Narnia from the forces of evil (succeeded).

Aslan is one of the main protagonists in the Chronicles of Narnia franchise, and the only one to appear in all the books, and the ultimate symbol of good. He is a lion who created Narnia, sacrificed himself to save Edmund, resurrected, then killed Jadis the White Witch and destroyed Narnia by uttering "It's time those who were loyal to him stayed with him in Aslan's Country (the real Narnia)".

He is voiced by Liam Neeson in the live action adaptations, who also portrayed Bryan Mills in Taken, Zeus in the remake Clash of the Titans, its sequel Wrath of the Titans, Ottoway in The Grey, Michael MacCauley in The Commuter, John "Hannibal" Smith in The A-Team (2010) and Qui-Gon Jinn in Star Wars. In the 1979 animated movie, he is voiced by the late Stephen Torne.

Aslan created the world of Narnia in the Earth year 1900. He created and brought everything to life in there. Narnia was made in the image of Aslan’s Country, the “real” Narnia, although it was nothing more than a shadow compared to the latter’s glory. At the creation of Narnia, Aslan also witnessed the writing of the Deep Magic from the Dawn of Time by his father, the Emperor-beyond-the-Sea.

Aslan chose two specimens, one male and one female, of each species of dumb beasts, upon which to endow the powers of thought and speech. These intelligent beasts then formed the first council of Narnia, which eventually spawned the races of talking beasts that populated Narnia for centuries afterwards. He crowned Frank and his wife, Helen, two humans from Earth, the first King and Queen of Narnia. It is clear that all humans in Narnia originate from Earth.

Aslan banished Jadis, a half-Jinn, half-giant woman, originally from the world of Charn, who had accidentally been brought into Narnia, to the northern land of Ettinsmoor. He then ordered Digory Kirke, a human boy from Earth in Narnia at the time, to fetch an apple from the Tree of Youth, from whose seeds grew the Tree of Protection, from which in turn he allowed Digory to take an apple to Earth, in order to heal his sick mother. This apple’s seeds eventually grew into the tree whose wood would become the wardrobe.

When the four Pevensies first came to Narnia, heralding the fulfillment of the Golden Age Prophecy, Aslan returned to Narnia in order to aid them in their fight against the White Witch. His presence brought an end to the Long Winter. Upon arrival, he began gathering all those still faithful to him near the Stone Table.

Aslan greeted Peter, Susan, and Lucy Pevensie upon their arrival at his campsite, near the Stone Table. He asked where Edmund was, yet appeared emotionless when told of Edmund's betrayal to the White Witch, though he did say, "All shall be done" to save their brother. After that, he briefly spoke to Peter, telling him how he would be the High King, and showed him the site of Cair Paravel. Shortly after, the Wolf, Maugrim, arrived and attempted to kill Susan and Lucy, only to be slayed by Peter. For his heroism, Aslan knighted him to The Most Noble Order of the Lion, as Sir Peter Wolfsbane.

Aslan then sent his army to rescue Edmund from the White Witch. According to the laws of the Deep Magic, it was the White Witch’s right to sacrifice Edmund, as he was a traitor, and all traitors belong to her. In order to save him, Aslan agreed to be sacrificed in his stead. However, Aslan was resurrected.

Upon his resurrection, he then revived the petrified Narnians in the White Witch's Courtyard, and led them into the First Battle of Beruna, which he quickly resolved by killing the Witch. After the war was won, Aslan revived those who had been petrified in the battle, and crowned the Pevensies as the new monarchs of Narnia, before disappearing. Mr. Beaver told the Pevensies that Aslan often left to attend to other countries, and that he didn't like being tied down, but assured them he would return one day. He did warn them, however, not to press him, as he wasn't a tame lion.

During the Golden Age, Aslan returned briefly to Narnia, and also to Archenland, to help Shasta, Aravis and the talking horses, Bree and Hwin, escape Calormen for the freedom of Narnia. He also apparently helped save Cor as a baby, by seeing to it that the boat Cor was on floated to the shoreline, where he was found by his adoptive guardian, Arsheesh. In the process, he helped Shasta discover his true identity as Cor, Prince of Archenland, taught Aravis to abandon her pride and faith in the Calormene god Tash, and helped stop Rabadash from conquering Narnia.

When Aravis fled to the Archenland border, he slashed her back to inflict on her the punishment she had caused to be inflicted on the slave she had drugged to escape her prideful stepmother. When he approached Aravis later, he explained his actions, and she agreed she had deserved the shock of corporal punishment. Thus reconciled, Aslan led the Calormene refugees to the council where Rabadash met his own punishment with distinctly less grace and dignity than Aravis had displayed.

Aslan was absent from Narnia during the Telmarine Conquest, and therefore most of the hunted and oppressed Narnians lost faith in him. However, when the Pevensies were transported to Narnia by Susan's horn, Aslan returned, and slowly tried to get them to believe in him once more. Although they did not follow him at first, they eventually trusted him again, and, accordingly, Aslan awoke the hibernating Narnians, and called forth a river-god to end the Second Battle of Beruna. Aslan crowned Caspian X as the next king of Narnia, and returned many of the conquered Telmarines to Earth, to start a new life.

Search for Aslan's Country and the Seven Lost Lords

Several years after ascending his throne, Caspian X lead a voyage aboard the Dawn Treader to find Aslan’s Country at the end of the world, and to find the Seven Lost Lords. Aslan called Edmund, Lucy Pevensie and Eustace Scrubb from Earth to join Caspian on his voyage, in order to teach them important personal lessons.

On Deathwater Island, Aslan helped Caspian and Edmund learn to resist greed, helped Lucy come to terms with her insecurities and need to be beautiful on Coriakin's Island, and turned Eustace into a dragon in order to help him realise his own flaws and self-righteousness on Dragon Island.

Once the Dawn Treader reached the sweet waters, Aslan ordered Caspian through a dream to send Edmund, Lucy, Eustace and the talking mouse, Reepicheep, to the shore at the end of the world. Here, Aslan allowed Reepicheep to pass on from Narnia to Aslan’s Country, as was his greatest dream, and sent the others home.

When Caspian’s wife, Ramandu's daughter, was killed by the Lady of the Green Kirtle, and his only son, Prince Rilian, was kidnapped by the same witch; she planned to use him to slowly conquer Narnia. As an old man, Caspian chose to search for Aslan, to ask him who should ascend the throne of Narnia after he died, believing that Rilian was lost.

Aslan, knowing that Rilian was alive, but hypnotized by the Lady of the Green Kirtle’s enchantments, brought Eustace Scrubb and Jill Pole to Narnia, and ordered them to find him. They eventually succeeded, but Caspian had by that time died; Aslan took him to his Country, a young man once more.When Caspian’s wife, Ramandu's daughter, was killed by the Lady of the Green Kirtle, and his only son, Prince Rilian, was kidnapped by the same witch; she planned to use him to slowly conquer Narnia. As an old man, Caspian chose to search for Aslan, to ask him who should ascend the throne of Narnia after he died, believing that Rilian was lost.

Aslan, knowing that Rilian was alive, but hypnotized by the Lady of the Green Kirtle’s enchantments, brought Eustace Scrubb and Jill Pole to Narnia, and ordered them to find him. They eventually succeeded, but Caspian had by that time died; Aslan took him to his Country, a young man once more.

During the rule of King Tirian, most of the inhabitants of Narnia fell prey to a lie, stating that the donkey Puzzle was Aslan, and that Aslan and the demon Tash, whom the Calormenes worshipped, were one of the same being. A great war between the Calormenes and the Narnians ravaged all the lands.

Aslan came to Narnia for the last time, and destroyed the entire world. He passed judgment of every one of its inhabitants, allowing those who were faithful, good and innocent to pass into Aslan’s Country, where they would exist in eternal peace, while the unvirtuous and honorless vanish into his shadow, their fate is unknown even to the author. It is presumed that they are sent to Tash's country for eternal damnation. At the same time, a train crash, which killed the Seven Friends of Narnia, as well as Mr. and Mrs. Pevensie, occurred, but Aslan had them all brought to Narnia. He ordered Peter Pevensie to “Shut the Door” on Narnia forever, and admitted them all to his Country.

Notably, Aslan chose not to bring Susan Pevensie to his Country (though she did not actually die in the train crash). She did not believe in Aslan or Narnia at the time, though it is considered likely that she would later remember the truth, and would one day enter Aslan's Country. Notably, Aslan himself had instructed the elder Pevensie children to look to their own lives and not try to enter Narnia again after the Exile of the Telmarines. It would seem quite out of character for Aslan to simply abandon Susan to the loss of her entire family for having done exactly what he had ordered her to do, though Aslan could have had other plans for Susan in the future.

As seen in The Magician's Nephew, there are other worlds besides Narnia. There are a vast number of worlds with their own lands, inhabitants and laws, all of which are accessible from the Wood between the Worlds. It is indicated that Aslan exists in all worlds as some sort of divine figure of good. His avatars are different in each world, as are his specific attributes and abilities. It is clear that on Earth, Aslan is Jesus Christ. C.S. Lewis writes in The Last Battle that in Aslan’s Country, Aslan no longer looks like a lion. It is unknown what shape he takes in his own country and it is also unknown what form (or forms) he takes in the various other worlds.

It is likely that Aslan's avatar of Charn brought the world of to its end when Jadis first left it, leaving it completely barren of all life 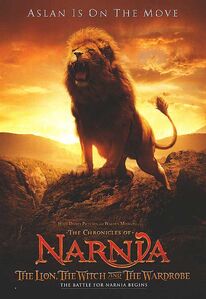 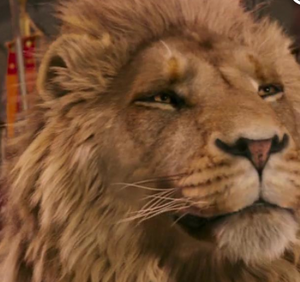 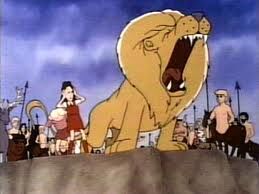 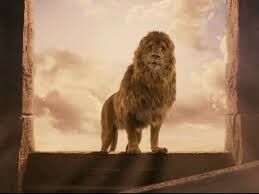 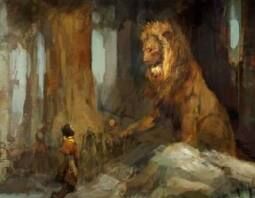 Formal illustration of Aslan with Lucy. 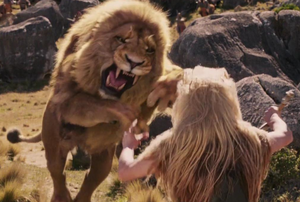 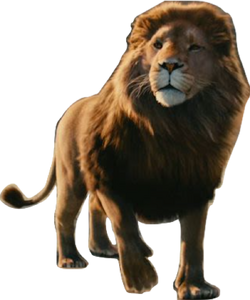 Aslan render
Add a photo to this gallery

Retrieved from "https://hero.fandom.com/wiki/Aslan?oldid=2167923"
Community content is available under CC-BY-SA unless otherwise noted.