Aspen Matthews is the main heroine from the comic book series Fathom.

Aspen Matthews is caught between two worlds. During her early adolescence, she could remember nothing from her early childhood. In her earliest memories she is on the cruise ship Paradise, thought to have been lost for ten years. She was adopted by Captain Matthews, a US Navy captain, and soon developed a passion for water, running to the nearest beach every day to enjoy her favorite recreations of swimming and surfing. She actively pursued this passion and showing tremendous aptitude eventually joined the US Olympic Swimming Team. She trained hard and was chosen to compete in the Olympic Games. However she was eliminated as she tested positive for performance-enhancing drugs despite never having taken any. This effectively ended Aspen's professional swimming career, so she chose to study marine biology.

Aspen eventually began to remember bits of her early childhood, including a memory with her mother talking to a member of the mysterious race known as the Black.

Aspen's unique heritage provides her with amazing powers. Like all Blue, she can manipulate water, but since she is also a Black she can do this to a much greater degree than other Blues. She can instantly form massive waves and tsunami's without even thinking about it, as well as control the oceans if storms or other things cause them to become destructive. Her powers don't only work on a large scale though, she can form water into solid shapes or even make it sturdy enough to walk on. Aspen can control all liquid, allowing her to even change the flow of blood in someone's body or rip it out to kill them. She can change her physical body into water, letting it disperse and being able to pull herself back together. She also has the potential for massive amounts of ice control, though it hasn't been shown yet. As a Black she is capable of healing wounds (even fatal ones), shooting blasts of energy from her hands and becoming energy herself. She has been shown to have had her body destroyed and to remake it out of energy and water. She also has telepathy, but she's only used it with the Blacks, who are telepaths themselves.

Aside from her powers, Aspen is physically in great condition. Even before she knew about her powers, she was an Olympic swimmer and always kept in shape. Her basic biology is slightly different than other humans in that she has some additional brain tissue, her red-cell density is twice the average, she has the more flexible bone structure of someone still growing, and she naturally has 5 times the lung capacity of an Olympic swimmer. Aspen is also very intelligent and extremely knowledgeable about things involving water and the ocean thanks to her extensive education and experience as a marine biologist.

Aquakinesis - Aspen can create, shape and manipulate water, inorganic compound with liquid, gas (steam, water vapor), and solid (ice) states, including changing them from one state to others. 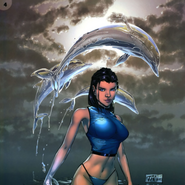 Add a photo to this gallery
Retrieved from "https://hero.fandom.com/wiki/Aspen_Matthews?oldid=1915876"
Community content is available under CC-BY-SA unless otherwise noted.