Flowey (after he died and was resurrected)

The God of Hyperdeath (in his final form)

Prince Of The Underground

Reliving and undoing the events of the Underground around him. (Formerly)

Use all of the souls to become a god and destroy the world (Neutral Run (as Flowey).
Join the Frisk's side and helping them kill as many monsters as possible (Genocide Run (as Flowey).

Asriel Dreemurr (also known as Flowey) is the main antagonist of Toby Fox's indie RPG Undertale. He is the son of Asgore Dreemurr and Toriel and the adoptive sibling to Chara, the fallen human Asriel found and befriended. When he and his sibling made a plan to free their people, monsterkind, from the Underground they were trapped in, it backfired and resulted in both of their deaths.

Over the course of Undertale, Asriel, having renamed his resurrected form, Flowey, turns from a villain seeking to rip the world away from the protagonist back into the mournful child he was trying to deny himself of being.

Little is known about Asriel in life, but he seemed to be a mischievous and cheerful child from a loving family. He loved to play harmless pranks on his sibling, whom he trusted like nobody else. He mentions being a "crybaby". Despite his young age, his devotion to his people was absolute, and he was willing to plan murder and the death of his own sibling to free them. His kind heart could ultimately not bear the burden, however, and at the last moment he realized it was only the bravado of a child with too much responsibility on his shoulders. He decided in the end that he would rather die than kill anyone, and ended up crumbling to dust in his parents' arms because of it. When he found himself resurrected without what seems to be one of his most defining traits - his ability to feel compassion - he was lost and terrified. Over a long time spent trying desperately to feel something, he hardened himself into everything he had died to prevent becoming, plunging himself into deep trauma and depression. At the end of the game, he has at last been broken out of his endless cycle. Now he eschews all violence once more, and while still empty is trying his best to be kind again.

Asriel is a Boss Monster, a goatlike, bipedal creature with large paws instead of hooves. He is a small child who wears green-and-yellow striped shirts and is seen in the game wearing dark blue trousers, possibly jeans. He has a short snout with two small fangs poking out of its tip and a scruff of hair atop his furry head. His fur is white, his ears long and floppy much like a lop rabbit's. While in possession of a heart locket to match his sibling's, his child form does not wear it in the game; he only wears it in one of his two 'boss' forms.

Resurrected, Asriel takes the form of a golden flower with a face capable of morphing into grotesque shapes.  With the power of souls, Asriel also takes three additional forms.

Before the events of Undertale, Asriel found the fallen human, who was the first human to fall into the Underground. He became their adoptive sibling and best friend. Just before the human died, their last wish was to see the golden flowers of their village, on the Surface. Asriel absorbed their SOUL, and the human carried their own body across the barrier to their home village. Asriel and his sibling shared control of Asriel's body after their SOULs had combined.

The scientist Alphys later used a powerful substance, determination, harvested from the souls of six other fallen humans on the flower Asriel's dust was spread on during her research into other ways to break the Barrier keeping the monsters trapped. While she did not know, this resurrected Asriel as a soulless husk with emotions so numbed it was as though he could no longer feel compassion. His newfound determination gave him the power to reset the timeline, which he did over and over until he felt like the world was little more than a game. 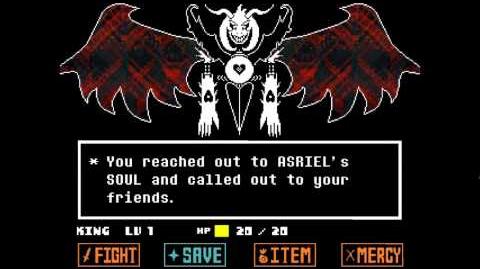