Member of the Black Bulls

Working out in the woods.

Adventuring.
Hanging out with Yuno, Sister Lily, Noelle & his other Black Bulls comrades.

Asta is the main protagonist of the anime series, Black Clover. He is an orphan who was raised at a church in the village called Hage. He's a wielder of the 5-leaf clover grimoire, as well as a member of the Black Bulls and the Royal Knights. He's a 3rd Class Junior Magic Knight.

Asta is a young man with a short stature, but a strong, ripped build and a pair of green eyes. He also has messy ash blond hair and a single strand protruding upwards from the center of his head. He keeps his hair together with a black headband, which has the gold-colored Black Bull insignia and a red-colored four-sided star with three stitches on it.

Asta's clothing consists of a white tunic with a V-shaped collar and long sleeves covered by a dark blue jacket whose sleeves extend only up to his elbows. He wears a pair of pants whose color is similar to his jacket, which has a stitch marks on the left knee. His pants also extends just below his knees. His shoes is made out of two different cloths, the parts covering his ankles, the soles the same color as his jacket and pants. The parts covering his toes are white, a vertical stitch mark going from the bridge to his toes.

After receiving his grimoire, Asta wears a pouch strapped to a brown leather belt. Additionally, as a Black Bull member, he wears his squad's signature robe, which is black and short with gold trimming and that covers the upper half of his torso. It also has a hood and a gold-colored button located at the right-hand side to hold it together, while the left-hand side displays the squad's insignia. 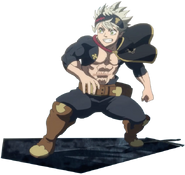 Asta is a cheerful and hyperactive boy who tends to shout a lot to express his thoughts and expresses his goals, without a care in the world for other people's opinions, as seen when he expressed his goal of becoming a Wizard King during the Magic Knights entrance exam, where he tells other people who disagree with him to shut up. His strong tenacity attracts Yami Sukehiro enough to recruit him into his ranks. His strong determination also leads him to have a strong will to never give up and keep standing during difficult battles, as acknowledged by Magna Swing.

Because of his upbringing at the Forsaken region, Asta frequently receives harsh opinions and insults from almost everyone he meets. This makes Asta have a slightly sarcastic nature as he tries to defend himself. But, having received harsh opinions from others, Asta has developed an immunity to them as he could easily brush them off without getting overly irritated. However, Asta is still annoyed when others deeply insult his comrades; he will not hesitate to confront them as he comes to the defense of his friends.

Asta has a very strong sense of justice, which is shown during his fight against Heath Grice, as he believes that everyone deserves to be protected. He is also not limited to only his comrades but his enemies as well, as when he asks his fellow squadmates to take the unconscious Mars along with them while the dungeon is collapsing. He argues that their mission is only to explore a dungeon and not to kill any enemies. Therefore, Asta seems to see the positive side of everyone and never takes an insult too seriously, as seen when he still befriends both Yuno and Noelle Silva, even after both given him harsh opinions.

His open, friendly and non judgmental attitude and indomitable will and stubborness has earned him hig regards of almost everybody he crosses paths with, even nobles such as Klaus and Fuegoleon Vermillion. It has also earned him the affection of plenty of girls, though due to having his heart set on Sister Lily he is highly oblivious to the fact.

Despite a sudden mutation causing not the slightest bit of mana to inhabit Asta, he continued training his body to match Mages, which allowed him to perform physical feats confused for being reinforced using magic. However, it was due to being born without mana that Asta could become Liebe's host and use his Anti-Magic without being inhibited. Since joining the Black Bulls, he has accomplished feats no other peasant, commoner, or Mage could without magic, defeating several powerful opponents such as Mars, Fana (Elf) + Salamander, Ladros enhanced using Salamander, as well as powerful devils such as Zagred.

Anti-Magic: Despite not having even the slightest mana in him, Asta can control Anti-Magic, a unique power that nullifies all manner of magic and mana without repercussions to him. This linked to the Devil, Liebei sealed inside of his five-leaf clover grimoire. Because of the uniqueness of this power, which defies common standards, Asta is classified as an Arcane Stage Mage.

No Mana: Because of a sudden mutation, Asta was born with no mana, making him unable to utilize even simple magic, however, it allows to use both Anti-Magic or Anti-Magic Swords without the usual mana draining effects. It makes him undetectable by mana sensors, and immune to the life-draining substances from the Underworld.

Ki: A principle originating from the Land of the Rising Sun, learned from Yami, letting Asta use his sixth sense to perceive and react to attacks before hitting him.

Devil Host: As the wielder of a five-leaf clover grimoire, Asta is linked to the Liebe, the source of the Anti-Magic, granting him access to the power. In later chapters, the more power he draws on, the more devil-like he becomes to the point of altering his appearance. Having undergone the Devil-Binding Ritual, he formed a pact with Liebe to share power as equals instead of him domineering over him.

Enhanced Strength: Asta has high-levels of strength, performing over thousands push-ups during several of his training sessions, swing large swords, punch or throw full-grown men far larger than himself, and punching holes in walls, all of which were done using one hand. After his arms were healed by the Witch Queen, she made them stronger and sturdier than before using her Blood Magic.

Enhanced Durability: Asta is highly durable, capable of standing back up despite receiving brutal attacks from a number of different Mages such as Revchi, Heath, Mars, Patolli, and Ladros empowered by Salamander.

Enhanced Speed: Asta has high level speed, which caused experienced Magic Knight Captain such as William to believe he was using magic to reinforce himself.

Heightened Instincts: He has displayed heightened instincts, which has allowed him to unconsciously move his body in the best manner possible to defend himself.

Master Swordsman: Unskilled at first, Asta used a rough style having not received basic training, however, after receiving training from a master swordsman, Fanzell Kruger. He has developed greater skills by attaining real-life combat experience, additional swords and Ki, as well as from multiple battles alongside and against other magic swordsmen such as Franzell, Mars, Kiato, Licht, and Yami.

Keen Intellect: Despite appearing, hyperactive, headstrong, and dumb, Asta has proven himself to be intelligent and thoughtful in his own right. He can understand various situations he gets himself in and act tactical whenever the situations calls for it, cutting out curses using his swords, thinking tactically, figuring out Ki after being guided in the middle of combat, as well as tapping into the powers of his Demon-Slayer Sword after watching the original wielder use one of his original swords in battle.

Grimoire: Asta owns a tattered black five-leaf clover grimoire, which he received during his fight against Revichi, originally a white four-leaf clover belonging to the Elf Leader, Licht before being corrupted by Zagred and where Liebe inhabits who become the source of Asta's Anti-Magic. Also housed inside this black grimoire are multiple Anti-Magic Swords, three of which belonged to Licht (two of them were found by Asta), however, against normal targets, these swords reduced to blunt weapons.